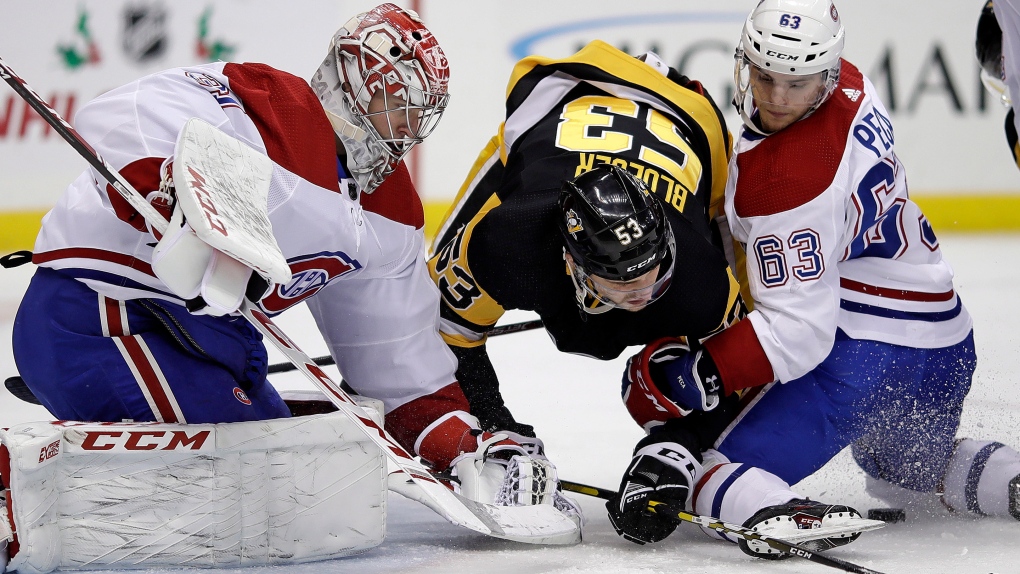 PITTSBURGH -- Tomas Tatar's 10th goal of the season ended Tristan Jarry's franchise-record shutout streak and sparked the Montreal Canadiens to a 4-1 victory over the Pittsburgh Penguins on Tuesday night.

Jarry's shutout run ended at 177:15 on Tatar's power-play goal 12:24 into the second period that tied the game. Joel Armia beat Jarry less than four minutes later to put the Canadiens in front to stay and Shea Weber's pretty wrap-around with just 15 seconds left in the period gave Carey Price more than enough breathing room as Montreal won for just the fourth time in its last 12 meetings with the Penguins.

Price surrendered Jake Guentzel's 17th goal just 2:59 into the first period but quickly settled down to outduel the red-hot Jarry. Price finished with 33 saves as Montreal won for the third time in four games following an eight-game winless streak.

Jarry began the night leading the league in goals-against average and save percentage thanks to a surge that included back-to-back shutouts against St. Louis and Arizona last week. A point-blank stop on Nick Cousins early in the second period helped Jarry slip past the Tomas Vokoun's shutout mark of 173:06 set in 2013, but Jarry's luck ran out shortly after he surpassed Vokoun in the team record book.

Some sloppy play in front of Jarry helped the Canadiens finally break through. Pittsburgh was on the penalty kill in the second period following a slashing call against Evgeni Malkin when defenceman John Marino and forward Brandon Tanev both whiffed on clearing attempts. Montreal's Phillip Danault grabbed the loose puck and slipped a pass to Brendan Gallagher to set up a two-on-none. Gallagher set up Tatar, who beat Jarry to the short side, the first goal Jarry allowed since the second period of a loss to Columbus on Nov. 29.

Jarry's attempt at putting together another scoreless run didn't last long. Armia flipped a puck up the side boards, batted down Pittsburgh defenceman Kris Letang's clearing attempt then raced around Letang before stuffing it by Jarry to give Montreal the lead 16:17 into the second.

Weber followed just before the end of the period with the 213th goal of his career, and perhaps one of his prettiest. The veteran defenceman broke down the left side, faked a shot then raced behind the net for a wrap-around score with 15 seconds left in the period that seemed to sap the energy out of the Penguins. Gallagher's empty-net goal with 1:39 remaining snapped Pittsburgh's three-game winning streak.