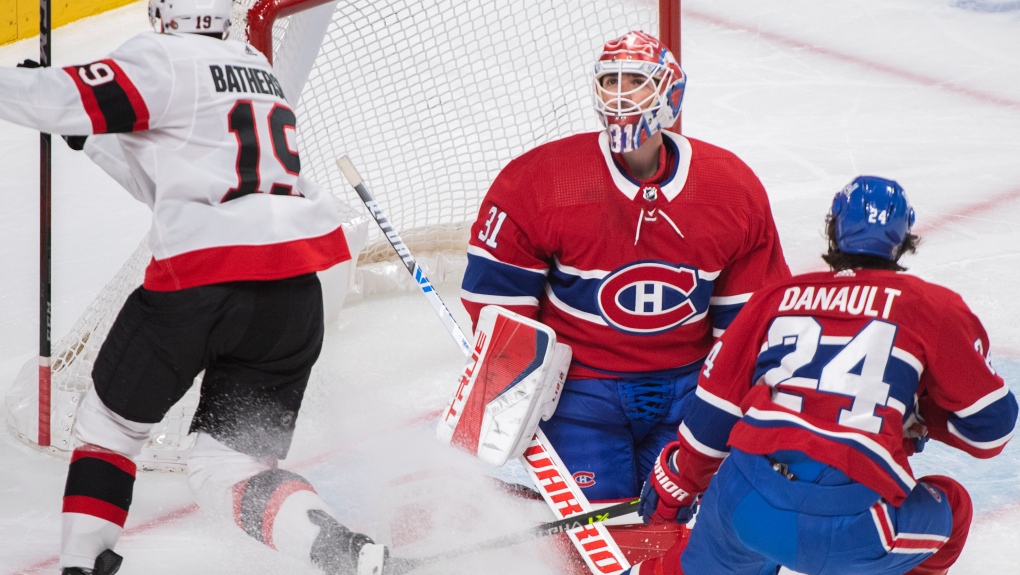 MONTREAL -- Drake Batherson had two goals and an assist, Matt Murray made 22 saves for his first shutout with the Senators, and Ottawa defeated the Montreal Canadiens 4-0 on Saturday.

Carey Price stopped 11 shots in his return to the lineup after missing six games with a lower-body injury for Montreal (19-14-9).

The Canadiens continued to occupy the North Division's fourth and final playoff spot. Montreal is six points up on the Calgary Flames with two games in hand.

The rebuilding Senators improved to 5-3-0 against the Canadiens this season, while three of their six road wins in 2021 have come at the Bell Centre.

Batherson has 11 points in eight games against Montreal.

Acquired from the Pittsburgh Penguins via a fall trade before signing a four-year, US$25-million contract extension with Ottawa, Murray picked up the 11th shutout of his career, and first since Oct. 26, 2019.

Senators forward Shane Pinto made his NHL debut after fellow University of North Dakota alumni and Ottawa defenceman Jacob Bernard-Docker -- a healthy scratch against Montreal -- did the same Wednesday.

With the 4 p.m. start, the Canadiens played a game for the second time in less than 24 hours following Friday's emotional 2-1 victory over Calgary.

Ottawa led 1-0 after the first period and doubled its lead at 13:12 of the second, when Batherson took a feed from Brady Tkachuk and fooled Price with a five-hole shot for his 14th goal of the season.

Murray, who made his second straight start after missing 13 games with an upper-body injury, had to be sharp on a power play earlier in the period. He stopped Eric Staal with his left pad on the door step.

The Senators was on its fourth power play with five minutes left in the third period of a low-event game when Batherson sealed the win at 15:26 going upstairs off a Tkachuk feed.

Zaitsev then iced it into empty net. Pinto picked up an assist for his first NHL point.

Murray and his teammates survived a late power play and preserved the shutout when Nick Suzuki hit the post.

The Senators winger collected the loose puck and found Zub in the slot for the blue-liner to rip his third past Price.

The Canadiens goaltender then robbed Evgenii Dadonov later in the period with his glove during an Ottawa power play.

Montreal sleepwalked through most of the opening 20 minutes, but got its best chance late when Jonathan Drouin -- without a goal in his last 23 games before Saturday -- intercepted a Colin White pass only to be denied by Murray's poke check.

Ottawa opens a three-game road trip Monday in Calgary before travelling to Vancouver for two versus the Canucks.

Montreal starts a five-game swing the same day through Alberta, and concludes it with a crucial three games against the Flames.

Notes: The Senators and Canadiens play twice more this season -- May 1 in Montreal and four days later in the nation's capital. ... Canadiens head coach Dominique Ducharme said before the game Brendan Gallagher (broken thumb) won't require surgery. The winger, who was injured April 5, is expected to be out until at least mid-May. ... Pinto is the fifth Ottawa player to make his NHL debut this season. ... Pinto (selected with the 32nd pick in the 2019 NHL draft) and Bernard-Docker (26th overall in 2018) both signed entry-level contracts April 1. ... Senators blue-liner Victor Mete, who was claimed off waivers Monday from Montreal, played against his former team.

This report by The Canadian Press was first published April 17, 2021.