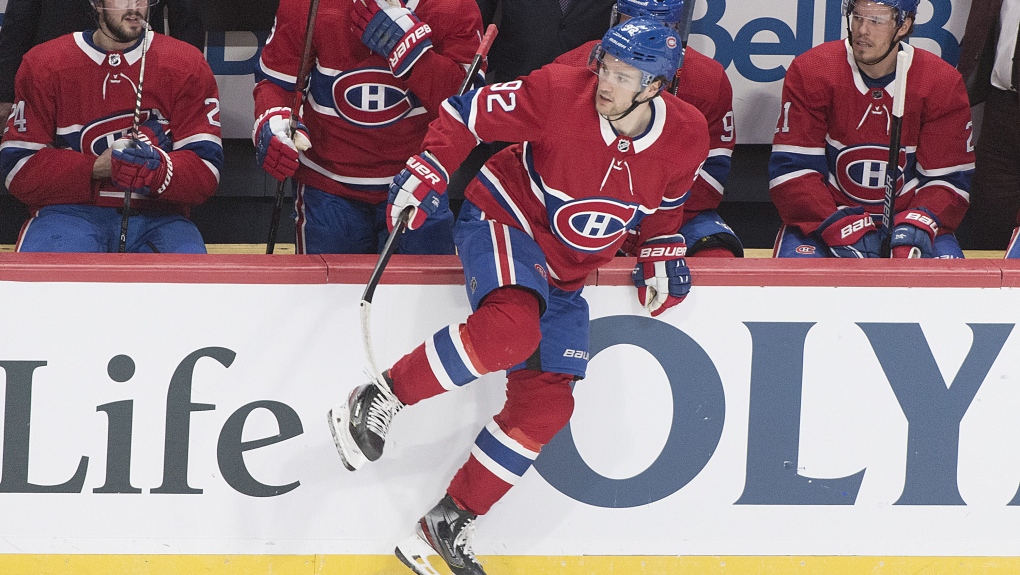 Jonathan Drouin says he's always raised his game when the stakes are highest.

It started in minor hockey, continued when he graduated to junior -- just look at his stat lines from three post-seasons as a member of the QMJHL's Halifax Mooseheads -- and kept going early in his NHL career.

With the Montreal Canadiens handed a lifeline should the league resume its pandemic-hit 2019-20 campaign this summer, Drouin is looking to continue that trend of big performances in big moments.

"My game just goes up in playoff hockey," the 25-year-old said on a conference call Wednesday. "As a kid, it was hockey tournaments ... and junior days it was the same thing."

Drouin put up 102 points in 50 career playoff games with Halifax, including an eye-popping 41 in 16 contests back in 2014. He registered nine points in four outings as part of the Mooseheads' Memorial Cup victory the previous spring, and added 13 points in 13 appearances during two stints with Canada at the world junior hockey championship.

The native of Sainte-Agathe, Que., then contributed 14 points in 17 games at 21 years old in 2016 as the Tampa Bay Lightning made the NHL's Eastern Conference final.

Despite sitting 24th out of 31 teams when the league was forced to pause its season in March because of the COVID-19 pandemic, the Canadiens snuck under the wire and into the 24-club format unveiled last month.

Montreal, which had just 71 points from 71 games and was all but mathematically eliminated from playoff contention, would face the Pittsburgh Penguins in the best-of-five qualifying round for a post-season berth under the plan.

"If it was regular playoffs we wouldn't be in," Drouin said. "We're very fortunate ... I don't think we want to waste that opportunity."

The third pick in the 2013 NHL draft is also hoping for the opportunity to recapture his success from the fall.

Drouin blasted out of the gate in October with seven goals and 15 points in 17 games before suffering an wrist injury in mid-November the needed surgery.

Acquired in a trade with Tampa Bay for defenceman Mikhail Sergachev in June 2017, he returned to the lineup Feb. 8, but was held off the scoresheet in eight games when an ankle problem once again forced him to the sidelines.

"I felt way more comfortable in those first couple months of the season than I have ever been in Montreal," said Drouin, who signed a six-year, US$33-million contract with the Canadiens the same day he was acquired from the Lightning. "We were winning, we were happy with our game. It was the same for me. Everyone was going up in the right direction. That (wrist) injury was a blow, but the way I was feeling was the most important thing.

"The rest comes when I'm skating and I'm around the puck."

Taking part in a series of informal on- and off-ice workouts with a handful of teammates at Montreal's practice facility as part of Phase 2 of the NHL's return-to-play protocol, Drouin said he examined video of his performances when he was injured and again after the NHL went on hiatus.

"I want to grab what I did in that first (part of the) season and bring it for whenever hockey starts," he said. "The reasons I was playing well, the reasons I was skating ... you look at those things."

Yet to surpass 53 points in an NHL campaign, Drouin said he also watches clips of players with similar styles -- he referenced Toronto Maple Leafs winger Mitch Marner as one -- to try and incorporate different elements to his tool belt.

And Drouin, who said he hasn't had any lingering issues with either injury after hitting the ice for the first time in three months this week, is confident he can recapture his early-season form.

"I can get back to that energy I had, that pace," he said. "I saw I could be an impact player every night if I show up and play the game I'm supposed to play."

That would be a big boost for the Canadiens as they aim to write the first chapter of what could eventually turn out to be an improbable story.

"I'm not nervous to go in for this qualifying round," Drouin said. "I play well in those moments."

This report by The Canadian Press was first published June 17, 2020.