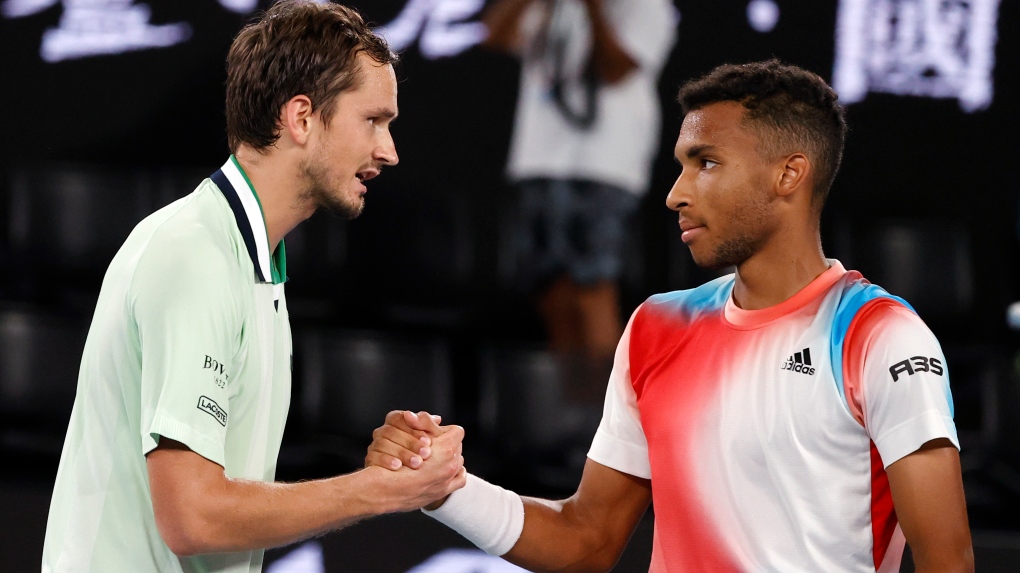 Felix Auger-Aliassime's bid to reach the semifinals at a second straight Grand Slam ended in heartbreak with a five-set loss to second seed Daniil Medvedev.

A six-minute delay in the third-set tiebreaker for the roof on Rod Laver Arena to be closed during a rain shower swung the momentum mostly in Medvedev's favour.

Auger-Aliassime won only one of the last six points in the tiebreaker after dominating for the first two sets. He missed a match point on Medvedev's serve in the 10th game of the fourth set.

The Montreal native reached his first career Grand Slam final at last year's U.S. Open, where his run was also ended by Medvedev.

That match in August 2021 was a far cry from Thursday's thriller, with Medvedev winning 6-4, 7-5, 6-2 en route to defeating Novak Djokovic in the final.

While the quarterfinal result will sting, Auger-Aliassime is continuing an upward trajectory through the ranks of men's tennis. He has reached at least the quarterfinal stage at three straight Grand Slams, and helped Canada to an ATP Cup title earlier this month.

And it was an impressive tournament for Canada's men's stars on the whole, with Denis Shapovalov of Richmond Hill, Ont., also reaching the quarterfinals before losing to Spanish legend Rafael Nadal in five sets.

Medvedev is looking to become the first man in the Open era to win his second Grand Slam title in the next major tournament.

Medvedev saved it with a big first serve out wide and then held with an overhead winner. The 25-year-old Russian broke in the penultimate game and held to level the match at two-sets all. He then got another service break when Auger-Aliassime double-faulted in the third game of the deciding set.

Medvedev had to save two break points before closing it out more than an hour after saving a match point.

Medvedev will play Friday against French Open runner-up Stefanos Tsitsipas. The Greek extended his perfect record in Grand Slam quarterfinals to 5-0 with a 6-3, 6-4, 6-2 win over No. 11 Jannik Sinner.

-- With files from The Associated Press.

This report by The Canadian Press was first published Jan. 26, 2022.

Prince Charles and Camilla, Duchess of Cornwall, have started their journey to Canada's North for the final day of the royal visit. The couple's plane departed from Ottawa International Airport for Yellowknife ahead of another busy day scheduled in the Northwest Territories.

Hundreds more Ukrainian fighters who made their stand inside Mariupol's bombed-out steel plant surrendered, bringing the total to over 1,700, Russia said Thursday, amid international fears about the fate of the prisoners in Moscow's hands.

An expert in Canadian policing says the New Brunswick officer who killed a 26-year-old Indigenous woman during a wellness check two years ago was following police training.

The spotlight in a Virginia courtroom has turned to attorney Camille Vasquez this week.

Montreal has 17 suspected monkeypox cases; officials say it's 'not highly contagious' or severe

Montreal Public Health said they're asking health workers to be alert for monkeypox cases but said the illness is also not extremely contagious and is the milder of two strains. There are 17 suspected cases in the Montreal area.