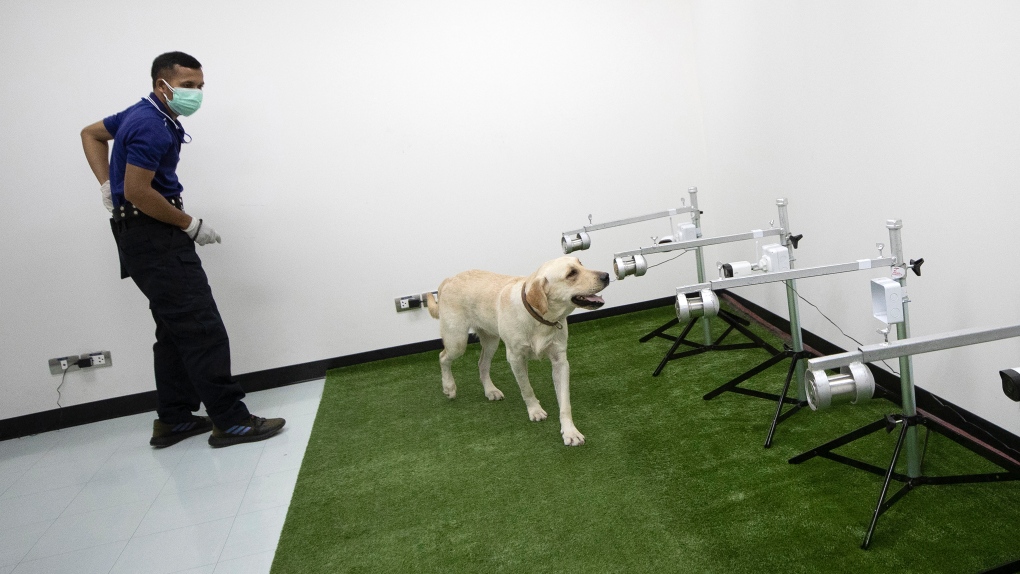 A dog trainer watches Bobby, a Labrador Retriever, sniffs samples of human sweat through containers to detect the COVID-19 coronavirus at the Veterinary Faculty at Chulalongkorn University in Bangkok, Thailand, Friday, May 21, 2021. (AP Photo/Sakchai Lalit)
MONTREAL -

A joint study by the University of Montreal's Faculty of Veterinary Medicine and the Institut Curie in Paris will test whether dogs can really detect the smell of cancer or even COVID-19, as some experiments have suggested.

These experiments have offered some hope that a dog could one day be asked to sniff a patient's breath to check for lung cancer or to walk through an airport looking for COVID-infected passengers based on the smell of their sweat.

In a systematic review of these studies, however, the Quebec and French researchers found that these results were based on very small samples and that the dogs may have fooled the humans.

“The study was not conducted in a blind or randomized condition, so the dog or another person in the room with him had an influence on how quickly he understood what was expected of him," said Dr. Eric Troncy of the University of Montreal's Faculty of Veterinary Medicine.

The researchers now want to conduct a double-blind, randomized study, which means that no participant will be informed of the nature of the sample that is presented to the dog.

“We believe strongly in the dog's olfactory capacity, but we have to guide it," said Troncy. “We have to teach him that in the odours that he will sniff, there is a whole palette of odours that are negatives. And so we're trying to expose dogs to thousands of samples by making them understand that, ‘This is not a smell I want you to mark, this is the one.’”

The researchers hope to be able to improve the dog's selectivity, thus its ability to not mark negative samples.

The study, which is one of ten projects receiving a total of nearly $1 million in funding from the Royal Canin Foundation, is still in its early stages. The clinical trial will be conducted in accordance with Health Canada standards, as the researchers must obtain the cooperation of various hospitals to obtain samples; this will require the green light from the ethics committees of these institutions.

They will also need to be able to get confirmation of the diagnosis from a doctor, such as a mammogram in the case of breast cancer, to see if the dog was right or not.

The Faculty of Veterinary Medicine at the University of Montreal will be developing a training course for all dog-training professionals interested in doing medical detection with their working dogs. The training is expected to consist of approximately seven modules and last approximately 180 hours.

“The training will be given online and in equal parts by French and Quebec collaborators," said Troncy.

Various delays encountered along the way, some of which were associated with the coronavirus pandemic, allowed the researchers to refine their experiment a bit, particularly to avoid the flaws they perceived in previous experiments.

Among other things, they decided to use dogs that are not totally 'naive'.

“We will work with dogs that have already been trained in olfactory detection," explained Troncy. “These are dogs that are trained to detect money, to detect deli meats, to detect drugs, et cetera. After that, what we're doing is re-immersing the dog in medical detection.”

The researchers also decided to focus on COVID-19 detection, given the “urgency of the situation.”

The first cohorts of dogs are currently being trained and the first results are expected early next year.

A judge ruled Monday he will allow jurors to hear evidence that disgraced South Carolina attorney Alex Murdaugh was stealing money from his law firm and clients and committing other financial crimes long before his wife and son were killed in 2021.