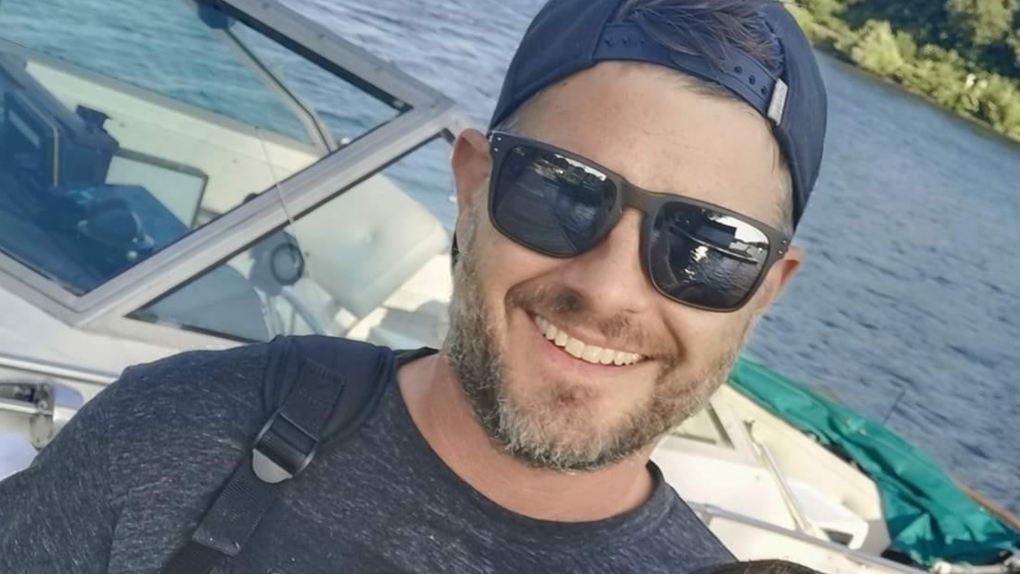 In September, a famous Quebec actor announced he had lost a lucrative longtime endorsement contract because he wasn't vaccinated.

Guillaume Lemay-Thivierge was the face of Hyundai Canada, at least until he said in a Facebook video that he hadn't gotten a COVID-19 shot.

But, the 46-year-old explained at the time, that wasn't quite right. He just hadn't done it yet—because his preferred vaccine wasn't ready.

He'd learned early on there would be several vaccines, he said in the selfie video, shot in a car. So, "I observe, I read, I inform myself, I'm curious."

He decided he wanted the Medicago vaccine. "What's Medicago? Ah!" he said in the video. "It's a Quebec vaccine." He said it "speaks to me" more than others.

Lemay-Thivierge is not alone, especially in Quebec. Over the past year, as the vast majority of Canadians got their COVID-19 vaccines, a tiny minority within a minority emerged: people who insisted they were simply holding out for Medicago.

At the time, there was no guarantee that Medicago, which is based in Quebec City, would ever see its COVID-19 vaccine approved for use.

But last month, Health Canada finally gave it the nod for adults, leading at least some of these people to confirm that they are, indeed, finally going to get a shot—which is welcome news to the government, though it has some health experts exasperated.

A man named Eric Villeneuve said the same, but went a step further. Still unvaccinated, he caught the Omicron variant in December and developed serious pneumonia (though he said the "primary" cause was not necessarily COVID-19).

He's only "90 per cent" recovered, he said. He's now planning to get Medicago when shipments arrive. And he has no regrets, he said.

"I think it was worth the wait," he said. "If I had to do it again, I would take the same route." 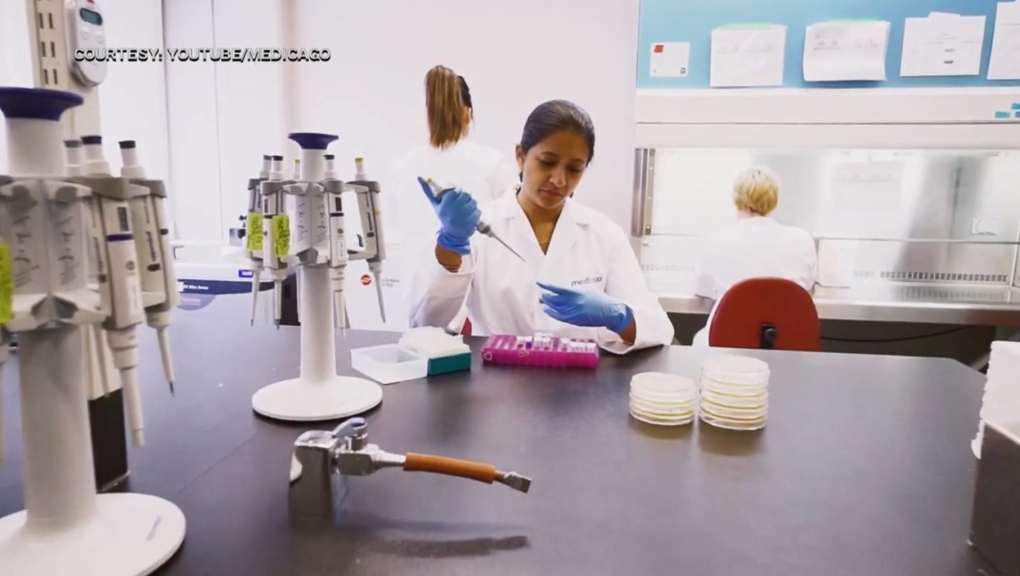 How did the vaccine get such a band of followers? Medicago's devotees tend to mention the same few themes.

"It is… created from plants, which interests me," said Villeneuve.

While past vaccines have used chicken egg cells, most often, as the host to grow the necessary protein, Medicago uses tobacco plant cells to do the same thing.

But Villeneuve said the main draw for him is " the fact that [Medicago's vaccine] is a non-mRNA type and has gone through all the steps to be approved."

This is a common worry, bolstered by conspiracy theories on social media: that the Pfizer and Moderna vaccines, made with brand-new mRNA technology, were rushed or pushed through without thorough vetting.

Both, in fact, were thoroughly vetted, in a process that was faster than usual simply due to the overwhelming pressure and funding created by the global crisis. Medicago's vaccine was also developed extremely quickly compared to pre-COVID norms.

But the worry is tied up, for many, with the fact that mRNA is a new method, they say. The key mechanism in Medicago’s vaccine is a virus-like particle that mimics a virus without containing any infectious genetic materials.

Many outlined specific fears about how mRNA vaccines work. One woman said she believes they simply don't work, despite all data to the contrary.

"All those who have been vaccinated around me have had COVID without exception and I had nothing at all," even though she was frequently hugging them maskless, said Lyne Pinet, another unvaccinated Quebecer who told CTV News that she plans to get a Medicago shot.

For some, it's slightly more complicated. Julie Douaire, who lives in Joliette, just northwest of Montreal, said she did get vaccinated with two mRNA shots at first, like most people.

"After the first dose, I had a very heavy period almost all the time for almost three months," she said, and the same happened after the second dose. (Changes in menstruation are, in fact, linked to vaccines, since menstruation is linked to the immune system).

"If the government 'forces' us with the vaccine pass [to get boosters]… well, I will have more confidence in a Quebec vaccine, made from plants, but above all, a traditional vaccine that is not mRNA," Douaire said. 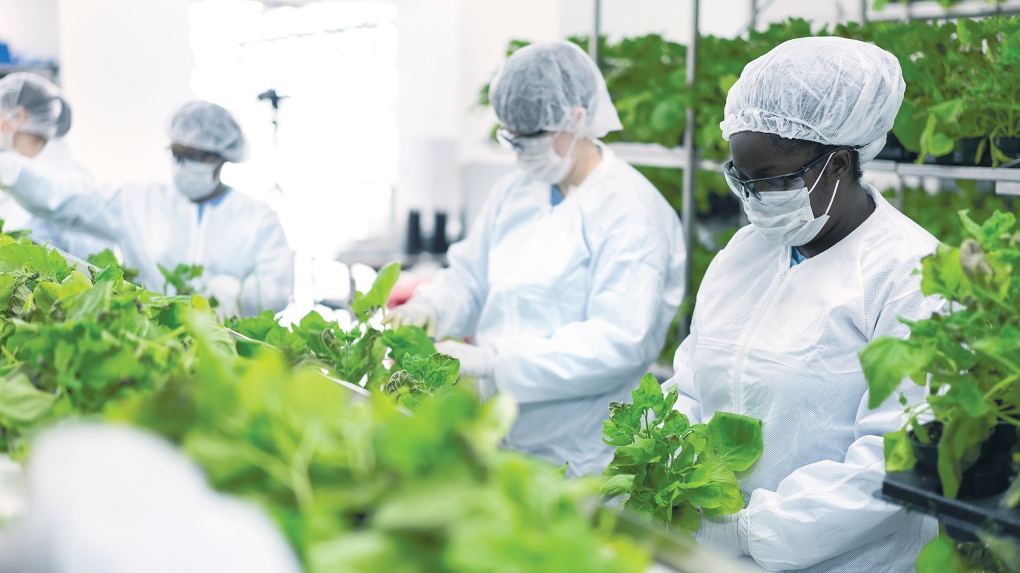 Researchers work with equipment in a Medicago facility in this undated handout photo. (Medicago/Handout)

For others it's only partly about health. Jason Hunt, a 38-year-old who said he had a streak of "rebel" in him, said that to take Medicago is to "support local."

"Pfizer is such a huge company that I don't really trust them," he said. "I would have rather had it to be local, go back into the local economy."

The fact that Medicago's is the first ever plant-based vaccine means nothing to him in an ethical sense, he said—he eats lots of meat—but as a "nature, camping, woods guy" it appealed, he said, and more so that a Quebec company made this breakthrough.

"I like the technology," he said. "To grow a plant with the [viral] message inside is absolutely revolutionary."

'I DON'T KNOW WHAT PEOPLE ARE THINKING'

Dr. Donald Vinh, a Montreal infectious diseases expert, said that he's aware of the Medicago-or-nothing group, though he's baffled by some of their beliefs.

"There's a buy-local aspect, so they attach themselves to the Quebec manufacturing thing," he said.

But while the company is headquartered in Quebec City, manufacturing isn't based there, he said. The company has a major plant in Durham, North Carolina.

"I don't think people understand what Medicago is. People think it's a plant-based vaccine and therefore it must be healthy—it must be vegetarian or vegan it might be organic," he said.

"I don't know what people are thinking."

Aside from chicken cells, virus-like particle vaccines are sometimes made with bacterial cells or even human cell lines, he said. Using plants just adds one more option.

"You're genetically introducing something that's not part of the plant," he said.

"There's nothing natural about this. It's as natural as any of the other vaccines -- which is completely unnatural."

As for not being a product of Big Pharma, a major component of the Medicago vaccine is made by GlaxoSmithKline, he said.

Medicago's effectiveness, which trials showed to be about 70 to 75 per cent, is "really good," but not as effective as the mRNA options, he said.

Medicago said trials demonstrated results against the most globally dominant variants at the time are comparable to the efficacy rates against variants among other approved vaccines on the market.

And it's also a relatively new technology in its own way, Vinh said. All vaccines that have virus-like particles are new—the only pre-existing one was for HPV, the human papillomavirus.

"To me people's fears or anxieties are always understandable," he said, and it's good if Medicago provides "an extra option."

But he has "a strong feeling" that people's vaccine-shopping is also based on "superficial knowledge or no knowledge," he said.

Vinh said the trend grew after the video by Lemay-Thivierge, the actor. Lemay-Thivierge's agent declined to comment on his behalf on whether he's still planning to get the vaccine and to explain his views on it.

PROVINCE WANTS NEW VACCINATIONS, HOWEVER THEY COME ABOUT

While it's now approved and being manufactured, Medicago shots won't actually be available to the public until May, according to an estimate the company sent CTV News.

While some health experts are annoyed at the picking-and-choosing, the Quebec government seems to be hoping all new vaccine options will nudge up the vaccine rate just a little further, without worrying too much about why.

For example, the Novavax vaccine is also finally coming to Quebec this month.

"It could be a solution for people who are more hesitant to use the [mRNA] vaccine," Quebec public health director Dr. Luc Boileau said in a press briefing last week, adding that for "some of them… let's hope that they benefit" when Novavax arrives.

In a statement, the provincial health ministry said the same, though they urged Quebecers to trust all the available vaccines.

"If Health Canada has approved them, they are safe and considered effective. And so, we encourage people who are still unvaccinated to educate themselves properly and get the necessary doses… whether it is an mRNA vaccine or not," the ministry wrote.

However, "we hope that the arrival of the Novovax vaccine (a vaccine based on a 'classic' protein-based technology) can convince some people who are reluctant," it added.

Not all of those who spoke to CTV said they're sticking with their plan in the end.

"I would be ready to get vaccinated!!" wrote Jason Hunt, the self-described "rebel," on Facebook on Dec. 7, explaining his preference for Medicago.

"I am not anti-vaccine. Like many of us I'm waiting and I'm deciding what to be injected with."

But three months later, he said he probably won't do it after all.

"I think it's too late, you know?" he said. He's already had COVID-19, twice, and his father banned him from the family home for being unvaccinated, which made him feel more stubborn about it.

He went to Ottawa for the convoy protest, which he called "the most amazing thing in the world," at least until it turned into a "siege."

"They're trying so hard to get all the unvaccinated vaccinated, but… if we didn't do it by now, we're not going to do it," he said.

Others said it will be a relief, in many senses, to finally join the vaccinated masses.

"I confess that I don't think I have [a good] reason to take Medicago," said Tourangeau, adding she doesn’t have "access" to the clinic trial data or the ability to analyze it.

She just has some worries, she said.

"Am I paranoid, or cautious and wise?" she said. "Time will tell."