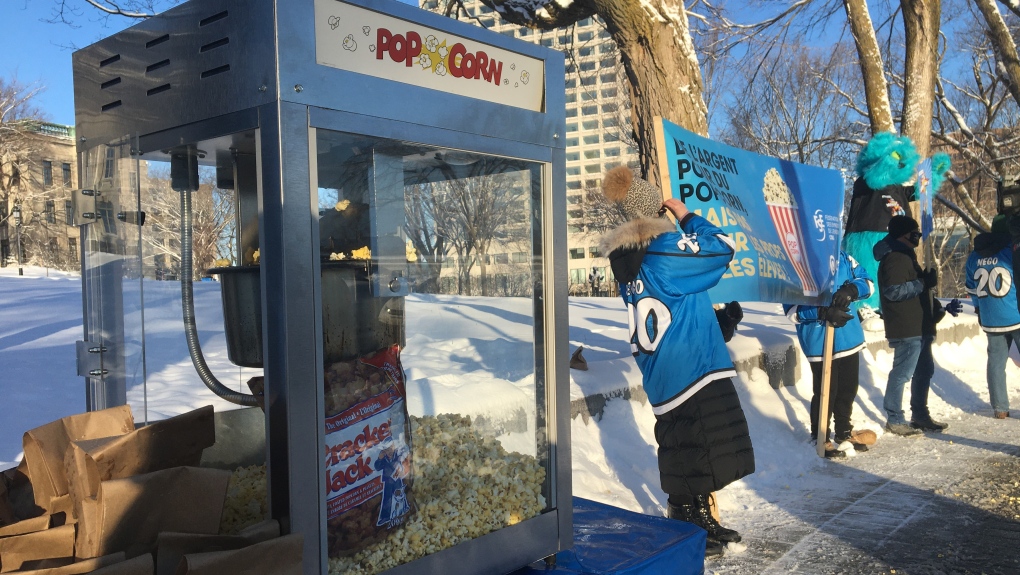 Teachers in Quebec are frustrated at the government compensating cinema owners for losses related to popcorn sales, while a collective agreement remains unsigned. They handed out popcorn at the National Assembly in protest Feb. 25, 2021.

MONTREAL -- Quebec politicians at the National Assembly can expect a salty snack and saltier message to start the day, as they show up for work Thursday morning.

The province's teachers union members plan to hand out popcorn to members of the government as a sign of frustration that business owners are being compensated for lost revenues while teachers remain without a collective agreement.

"Blown away by the government's decision to compensate for losses linked to the sale of popcorn in cinemas, teachers from the Federation of Education Unions (FSE-CSQ) will symbolically distribute popcorn in front of the National Assembly," reads a news release from the union.

The union has been battling the government for almost a year to agree on a collective agreement and has accused Francois Legault's CAQ government of ignoring their concerns.

Popcorn has become a political symbol in recent weeks after a spat between Guzzo Cinemas owner Vince Guzzo and the premier with Guzzo saying he wouldn't reopen his theatres if they could not sell snacks.

Legault put an end to "Popcorngate" by saying the government would compensate theatre owners for the lost revenue.

The saga did not impress the teachers' union, who adopted five-day strike mandates last week.

“In two days when businessmen decide they want to solve a problem of popcorn we find a way to find money and solve this file," said FSE-CSQ president Josee Scalabrini. “We don’t find money to solve major problems in education.”