Get those shovels ready, because a whole lot of snow has hit Quebec.

Environment and Climate Change Canada (ECCC) issued a winter storm warning on Sunday for the Greater Montreal Area with as much as 25 centimetres of snow expected in total.

After a dump of snow Monday morning, another five to 10 centimetres of snow are expected Monday afternoon before tapering off to flurries in the evening, ending at midnight.

The snow started falling Monday morning, and ECCC warns that strong winds are accompanying that snow, making visibility near zero.

“The snow is falling at a pretty steady rate and we've also got gusty winds creating blowing snow and reducing visibility on the roads,” said CTV weather specialist Lori Graham. “Of course winds are a factor and that's reduced visibility at times to about 400 metres in some areas.”

Winds from the northeast are blowing at 40 kilometres per hour, gusting close to 60 km/h, making the -5 Celsius temperature feel more like -16 C.

"Surfaces such as highways, roads, walkways and parking lots may become difficult to navigate due to accumulating snow," ECCC wrote.

Another round of snow is on the way for Wednesday, with about five centimetres expected for Montreal. 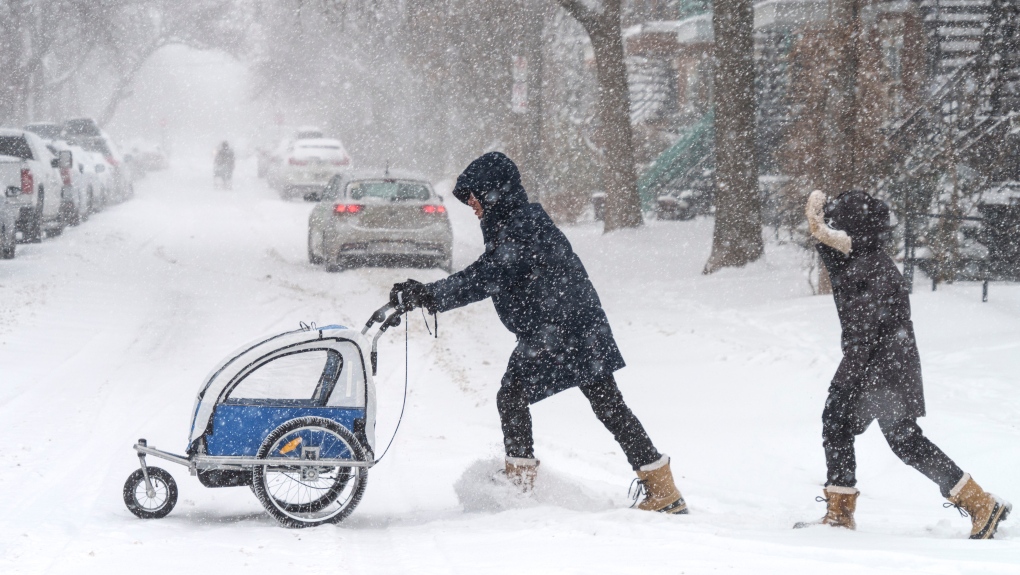 A man pushes a stroller during a winter snowstorm in Montreal on Monday, January 17, 2022. THE CANADIAN PRESS/Paul Chiasson

A man pushes a stroller during a winter snowstorm in Montreal on Monday, January 17, 2022. THE CANADIAN PRESS/Paul Chiasson

A snow clearing operation is underway in the City of Montreal, with snow removal to follow and expected to take about a week.

“The operation started last night by spreading salt, and rocks on the roads and sidewalks. This morning, We had 1,000 workers, the 1000 trucks on the road to push the snow aside and do extra salt, extra little rocks in order to ease your movements,” said City of Montreal spokesperson Philippe Sabourin.

Sabourin had some tips for anyone parking on city streets to help facilitate the snow clearing process.

“The city will need the cooperation of everyone. Please park your car 30 centimetres away from the sidewalk,” to allow enough room for workers to complete the snow clearing process. “Leave us some clearance on the sidewalks also and slow down your speed.”

A huge number of schools and daycares in the Montreal region told students to stay home on the first day of the winter term.

Canada Post issued a red delivery service alert for Quebec and no mail carriers will be delivering mail on Monday.

"Delivery will resume once conditions improve and it’s safe to do so," Canada Post said. "The safety of our employees is our number one priority."

Half of patients hospitalized with COVID-19 still experiencing at least one symptom two years later: study

Half of those hospitalized with COVID-19 at the start of the pandemic are still experiencing at least one symptom two years later, a new study suggests.

A former police officer, the 86-year-old mother of Buffalo's former fire commissioner, and a grandmother who fed the needy for decades were among those killed in a racist attack by a gunman on Saturday in a Buffalo grocery store. Three people were also wounded.