Bruins pull even in series with 5-4 OT win 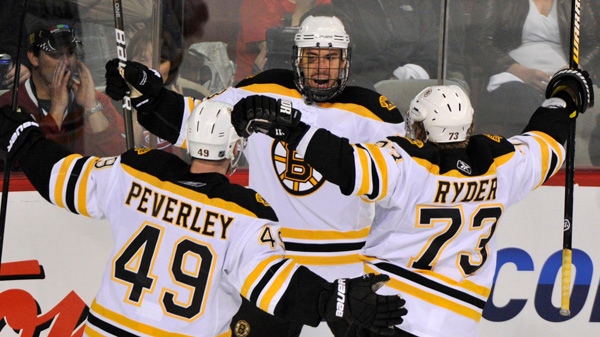 MONTREAL - Michael Ryder's second goal of the game 1:59 into overtime gave the Boston Bruins a 5-4 comeback victory over the Montreal Canadiens on Thursday night to even their playoff series at two games apiece.

A 3-on-1 break saw Rich Peverley shoot wide and Chris Kelly slip the rebound off the end boards to Ryder alone at the side of the net.

The best-of-seven eastern Conference quarter-final is tied going into Game 5 on Saturday night in Boston. After dropping the first two games, the Bruins won twice in Montreal in a series in which neither team has won at home.

Rookie P.K. Subban put Montreal ahead 1:39 into the third period after he was left alone in the left circle and picked a spot under the cross bar on goalie Tim Thomas.

But a furious Boston comeback bid came through as Kelly converted a Peverley pass at 13:42 to mark the third time the Bruins had come back to tie the game. It forced the first overtime of the series.

The Canadiens, normally a tight defensive club, surrendered leads of 1-0, 3-1 and 4-3 and for once were not bailed out by goaltender Carey Price.

Michael Cammalleri had a goal and two assists to give him seven points in three games, while Brent Sopel and Andrei Kostitsyn also scored for Montreal.

Andrew Ference and Patrice Bergeron had the other Boston goals in the highest scoring and easily most entertaining game of the series thus far.

The 21,273 at the Bell Centre were even louder than for Game 3 to start the game and the Canadiens dominated the opening period, outshooting Boston 15-8 and grabbing a 1-0 lead.

Thomas made some fine saves, including a beauty on Brian Gionta, but let in a soft one as low-scoring defenceman Sopel's long shot got under his arm at 8:13.

The Bruins tied it 2:13 into the second when Tomas Kaberle sent Ryder in on the right side, shooting a high blast that eluded Price's glove.

Montreal had the arena rocking with two goals in a 55-second span as Cammalleri tapped one in after a wild flurry around Thomas and Kostitsyn went to the net to jam in a Tomas Plekanec feed at 7:47.

But Bruins coach Claude Julien called a time out and Boston struck back at 9:59 when Ference followed in a rush to wire a high shot from the high slot. The Boston defenceman then gave the crowd the middle finger with a gloved hand, which will no doubt draw attention from the league's disciplinarians.

Bergeron tied it at 17:04 when price failed to cover his post and Brad Marchand slipped it in front for a shot into an open net.

In the first three games, the score had remained 0-0 for a total of only 6:38 due to early goals, and Game 4 marked the first time there were tie scores other than 0-0.

Notes: Jeff Halpern, who missed 11 of the last 15 games with an injury, returned to the lineup. Benoit Pouliot was scratched. . . Sopel matched his goal production from last spring when he had one in 22 games for Chicago. . . Ference got his first playoff goal since 2001 with Pittsburgh. . . Boston's Chris Kelly played in a face cage due to a minor injury from Game 3. . . Gionta has never missed a playoff games, streak now at 90.