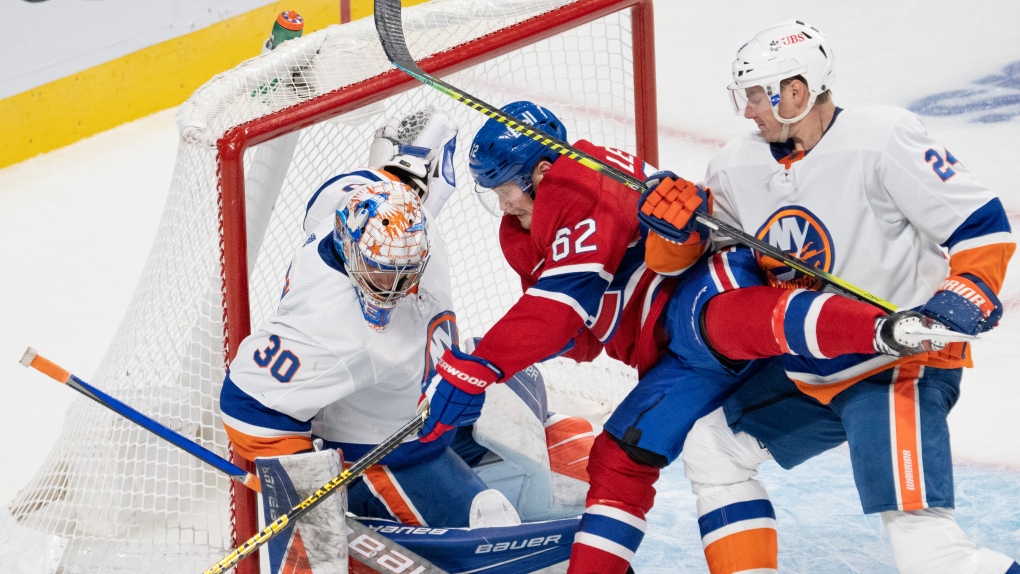 The Canadiens didn't escape their losing streak for long.

Brock Nelson scored four goals for the first time in his career, Ilya Sorokin made 36 saves, and the New York Islanders defeated the Montreal team 6-2 on Thursday night at the Bell Centre.

Two days after playing what head coach Dominique Ducharme called a "model" game in a 3-0 win over the Detroit Red Wings, the Tricolore were again downgraded by their opponent, who led 5-0 after two periods. It was the sixth time in 12 games this season that the Habs lost by at least three goals.

It was a particularly tough night for the trio of Christian Dvorak, Mike Hoffman and Josh Anderson, as all three players were minus-4 after two periods of play. Defensemen Brett Kulak and David Savard were both minus-3.

Nick Suzuki and Tyler Toffoli saved the day for the Canadiens (3-9-0) by scoring late in the third period. Jake Allen gave up five goals on 25 shots in the first 40 minutes of play. Samuel Montembeault was thrown into the lion's den in the third period and stopped 10 shots.

Jean-Gabriel Pageau had a goal and an assist, while Oliver Wahlstrom also had a hit for the Islanders (4-2-2). Anthony Beauvillier had three assists and Zach Parise had two.

The Tricolore were without forward Jonathan Drouin, who was hit in the face by a shot from teammate Brett Kulak in Tuesday's game against the Detroit Red Wings. Adam Brooks replaced him in the lineup.

Defenseman Alexander Romanov was back in the lineup after being left out against the Red Wings. Sami Niku gave up his place.

The Canadiens will play their next game on Saturday when the Vegas Golden Knights will be the visitors at the Bell Centre.

There wasn't much action in the first period, but the Islanders still found a way to open the scoring after 4:14 of play. Nelson scored his first goal of the night after great individual efforts from him and Kyle Palmieri.

The game was more lively in the second period, but the sky fell for the Tricolore late in the period.

Yes, Wahlstrom extended the lead to 2-0 after 3:31 of play, but the Habs still threatened Sorokin's net a few times.

The Russian goaltender made some nice saves on Anderson, Michael Pezzetta and Dvorak.

However, the Islanders increased their lead with three more goals in the second half.

Nelson completed his hat trick by first taking advantage of a loose puck with 7:35 to go in the second period, then completing an overtime attack with Beauvillier with 4:37 to go.

Pageau added fuel to the fire with the Islanders' fifth goal at 1:52 to go in the second.

The stands quickly began to empty out in the third period as the final outcome became clear. Those who stayed until the end were not shy about expressing their displeasure with the performance of their favourites.

There was a small moment of celebration when Suzuki scored on a shorthanded goal with 4:40 left on the clock with a good shot from the side of the net. Toffoli came right back 1:44 later on a two-man power play.

Nelson added his fourth goal of the night, scoring into an empty net with 18.8 seconds left.

--This report was first published in French by The Canadian Press on Nov. 4, 2021.

Police reveal identity of Philly's slain 'Boy in the Box'

Nearly 66 years after the battered body of a young boy was found stuffed inside a cardboard box, Philadelphia police say they have finally unlocked a central mystery in the city's most notorious cold case: The victim's identity.

The federal Liberal government has presented a new bill aimed at enshrining in law their commitment to the Canada-wide early learning and child-care system, and the long-term funding needed to maintain it. The minister responsible said the legislation is needed in-part to ensure that the nationwide system being can't easily be scrapped by a future federal government.