Students at one of Canada’s supposed top “party schools” are holding their administration to account—and questioning whether that very "party" label is putting them in danger.

At Bishop's University, just outside Sherbrooke, Quebec, women in particular are at higher risk of sexual assault because of this school-wide reputation, some say.

“I remember going on a date with a guy who went to another school and he got mad I didn’t want to sleep with him,” one young woman wrote on Instagram.

“He said ‘well you’re from Bishop's, aren’t the girls all supposed to be sluts there?’”

The reckoning at Bishop’s began in the last week, when a student grew so frustrated with the university administration’s response to her sexual assault allegation that she posted a message as publicly as possible: on a bridge near campus.

“He raped me. I reported. He's still in my class. BU take action,” the anonymous student wrote in black-on-white pages pasted to the bridge. 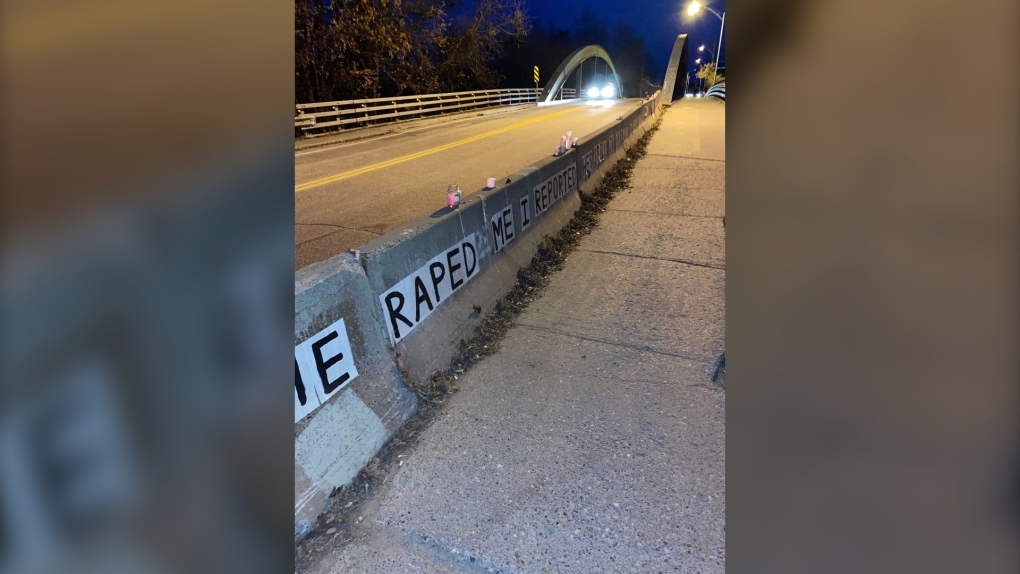 Pieces of paper with the words “He raped me. I reported. He's still in my class. BU take action" were fixed to a bridge near the university campus, inspiring other students to follow suit with their own messages.

The anonymous student's posting inspired other students to follow suit with their own messages and stories of sexual assault. (Laurence Belanger)

Other students followed, sticking their own accusations to the bridge’s concrete with tape or glue.

“Reported a drugging incident. I was asked what I was wearing. I never heard back. It’s been 3 years,” read one example.

The university has launched a series of actions in response, hiring an independent investigator to look into the first case described on the bridge and holding a two-hour town hall this week.

But many students, parents and alumni are not satisfied, saying the school needs to do much more. They’re also trying to draw attention to a bigger pattern that they say creates some of these risks in the first place, and can make it harder to get recourse when the worst happens.

Many are submitting personal stories to Instagram pages that compile accounts of sexual assault and publish them anonymously, allowing people to make their stories public without attaching their names.

Numerous posts have slammed Bishop’s administration over instances when they tried to get help but didn't.

“I had my drink roofied at Happy Hour by a classmate. Not only did I have to see him every day in class, but he was also friends with my roommate…I felt like there was no escaping him,” one student wrote in a post to an Instagram account called "Bishop’s Confessions."

“When I finally processed what had happened and came forward they told me too much time had passed to take action… it had only been a few weeks.”

Until recently, the Bishop's Confessions account was about a different kind of “confessions.”

But this month, those running the account turned it over to its users in a new way. This kind of social-media outpouring has become a repeated pattern at various schools over the last couple of years.

“Got roofied on Halloween, woke up alone covered in hickeys and bruises,” another student wrote.“I don’t know who did it but they left me unconscious when they were done.”

The woman whose date called her classmates “sluts” addressed other students, writing, “Bishops girls are not obligated to sleep with you. We always have a choice, don’t let anyone make you feel otherwise!”

Bishop’s reputation as a party school isn't local or informal—for years it’s been near the top of Maclean’s magazine’s annual university rankings in the “party school” category. In 2021, it was named Canada’s number-two party school.

This week, in a radio interview, Bishop’s dean of students Stine Linden-Andersen acknowledged the presence of sexual assault on campus and a culture that emboldens aggressors. She apologized—but said this was true on every campus.

But some students and alumni disagree.

“I think it's worse at Bishop’s,” a woman named Kassy, who went to Bishop’s for a year, told CTV. “Partying at Bishop's [is] definitely perceived as dangerous.”

Kassy, who didn’t want her last name published to preserve her privacy, finished her schooling at Champlain College, which shares a campus with Bishop’s.

She said she knew women who were assaulted during her time there.

“There was a big frat house that's always getting trashed—right beside the bridge, actually—that always had a bad reputation of not, I guess, being safe,” she said.

“There was one year where I had a friend that said ‘Okay, let's go experience this…' we didn't stay long because you couldn't see what was in the alcohol, which is not ideal,” she said.

One reason there’s so much drinking is that many students come to Bishop’s from Ontario, where the legal drinking age is a year older, and they “let loose,” she said.

“I have no doubt there have been a lot of individuals that did experience sexual assault at Bishop’s,” said Kassy.

Like many alumni, she’s gotten involved this week, signing an online petition demanding change at the school. Some students from earlier decades wrote online that the problem is a longstanding one.

“Very disappointing and disturbing to know that these types of incidents are still taking place 30+ years after I graduated,” one woman wrote on the school’s Facebook page.

“As an alumnae [sic] and a donor I will follow with concern and interest.” 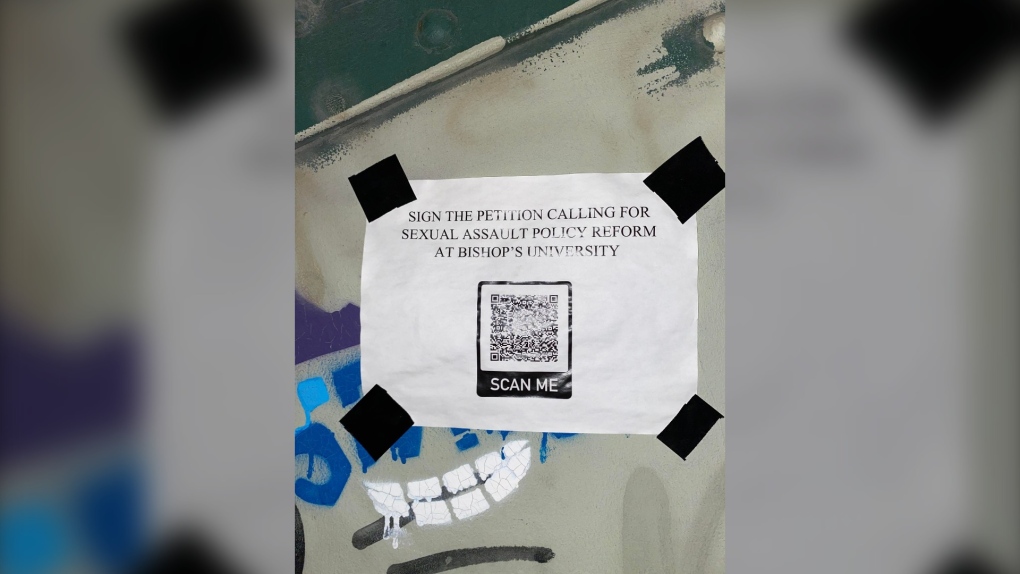 A poster urging students to sign a petition for sexual assault policy reform was posted on a bridge near the Bishop's University campus. (Laurence Belanger)

Another former student chose to talk to current students through their personal Instagram account, saying that “I was sexually assaulted many times throughout my years at B.U. I never reported anything because I thought it was my fault for being naïve and I was ashamed,” she wrote.

“Now that I’m older I understand that I did nothing wrong…. I don’t want those younger than me to have to go through what I went through.”

Kassy said that one issue with the “party school” label is that even assault victims read into it, blaming themselves simply for enrolling.

“I'm sure the victims would kind of take that internally—like, 'because it's a party school, because it has a reputation, when it does happen, is it my fault?'”

Others described having trouble with off-campus authorities in Sherbrooke such as police and the health system when they tried reporting a sexual assault.

“I was sexually assaulted during a huge party weekend,” one woman wrote. When she asked student services to help before going to the hospital, “they told me to use Google translate.”

One hospital in town, Hotel Dieu, “didn’t have a ‘sexual assault nurse’ meaning I had to drive to the other hospital in Sherbrooke for a rape kit— that they said they’d throw out after 14 days if I didn’t go to the police—no time to process,” she said.

“When I went back to student services for more support, they ignored my email.”

Others wrote about police not being willing to take down information when an assault was reported at a bar, telling the students to call back in the morning if they really wanted to report it.

ARE THE CHANGES ENOUGH?

A spokesperson for Bishop’s said it’s difficult to “comment… about how outsiders perceive us.”

“We certainly always do our best to showcase the quest for academic excellence of our students,” wrote spokesperson Sonia Patenaude.

“We believe our students are neither more nor less ostentatiously festive than their counterparts across town, or in many other universities across the country, and we suspect you’d hear the same from the authorities.”

However, Patenaude said the school is trying to make partying safer “in the spirit of harm reduction,” partly by keeping parties on campus.

“This is a deliberate choice to keep the most celebrated occasions of the calendar in a more controlled environment where we have the resources to better monitor and prevent excesses than elsewhere in the wider community,” she wrote.

Bishop’s has also launched training for responsible serving and alcohol-free alternatives, and established “safe spaces for sobering up with benevolent assistance,” as well as some other resources.

Former student Kassy said the on-campus bar, the Gait, did have a bodyguard, which made it feel safer.

At one point, Bishop’s also had a walk-home-safe program allowing students to call a number for accompaniment, but it was cancelled—it should be brought back, Kassy argued.

But like many other students, past and present, one of the changes she’d most like to see is for the administration to make it clear that wherever and however it happens, sexual assault will be taken extremely seriously.

“I heard [the] dean on the radio saying ‘We have all these measures in place,’” she said.

“It’s like, well if you did all those things right, how did someone get desperate enough to put that message on the bridge?”