For the first time at Quebec's national assembly, a new father stood up with his baby in a baby carrier. What's more, the whole family was on the benches.

During question period, Liberal MNA Gregory Kelley set a precedent by appearing in the blue room with little Gabriel, less than two months old, sleeping peacefully in his baby carrier.

Just minutes before, his mother, MNA Marwah Rizqy, was holding him in her arms with a bottle in sight.

The little one did not seem to be disturbed by the clamour in the blue room and the microphones never picked up any babbling or cries.

You couldn't see his face, but you could clearly see his full head of black hair and his little hand sticking out, as his dad stood up in the house to ask a question of the Minister of Social Solidarity and Community Action, Chantal Rouleau.

Minister Christian Dubé took a moment at the beginning of the question period to congratulate the new parents.

"I would like to take this opportunity to salute two colleagues from across the way who have honoured us today by bringing in (their baby)," said Dube, before correcting himself -- "Three, sorry" -- to include the baby. 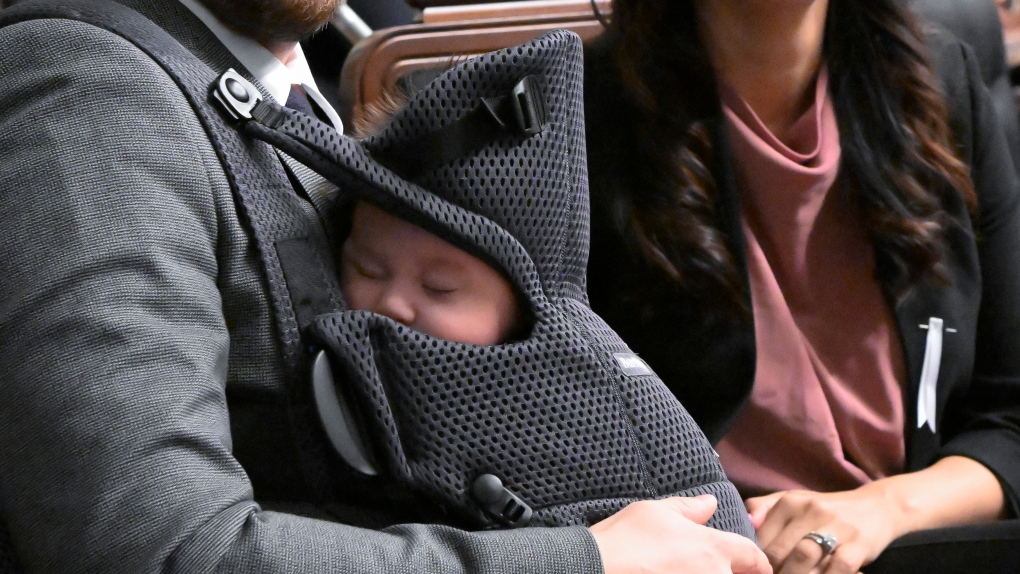 Quebec Liberal MNA Gregory Kelley holds his son Gabriel as mother Marwah Rizqy, also an MNA, sits beside him on Tuesday, December 6, 2022 at the legislature in Quebec City. The couple brought their newborn son to question period. THE CANADIAN PRESS/Jacques Boissinot

Little Gabriel was born on Oct. 20. His mother, Rizqy, continued her election campaign in Saint-Laurent while in her last months of pregnancy.

Elected women have brought their babies into the national assembly before, but this was the first time that a father stood up with the baby carrier strapped on with mom also sitting as an MNA.