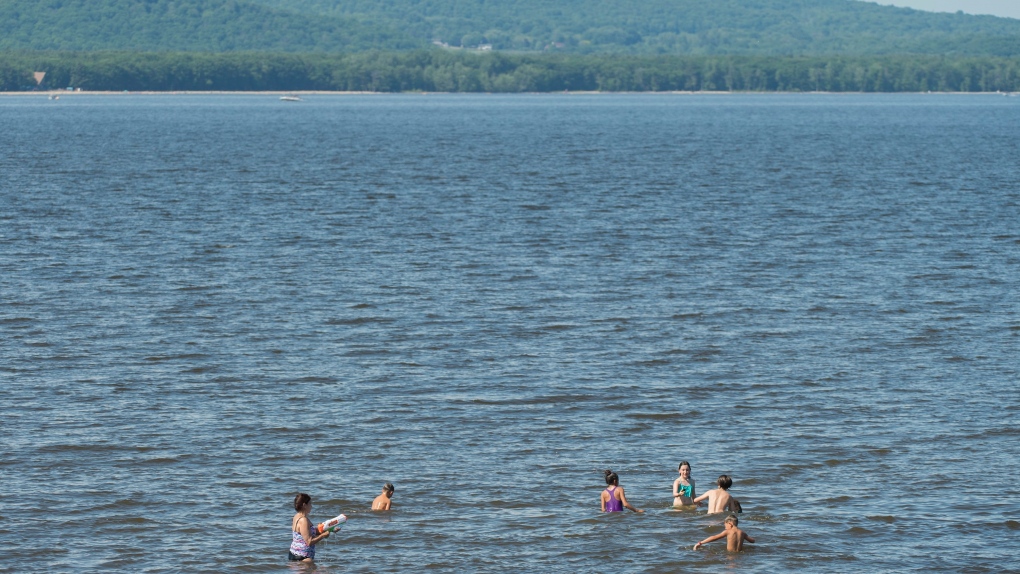 People beat the heat by wading in the Lake of Two Mountains near the town of Hudson, west of Montreal, Saturday, June 20, 2020, as a heat wave hits the region and the COVID-19 pandemic continues in Canada and around the world. Authorities are urging caution on the water after a string of deaths. THE CANADIAN PRESS/Graham Hughes

MONTREAL -- With the return of hot weather, the death toll on Quebec's bodies of water increased dramatically on the weekend, with at least five dead on Saturday alone.

The most recent victim reported is 36-year-old Ahmad-Wali Merzai, who was found dead in Roxton Pond in Yamaska National Park, about an hour east of Montreal.

Provincial police officers (SQ) were called to the scene, near David Bouchard Blvd. on Saturday, around 2:45 p.m.

The drowning came in addition to three family members, who were involved in a personal watercraft accident a few hours earlier and drown, in Nicolet, in the Center-du-Québec region.

“We are reminding the population to be vigilant on bodies of water, to watch their relatives and friends when people are near a body of water,” said Beauchamp. “The use of personal flotation devices is very important, it can save lives.”

A man in his 20s was also found lifeless after disappearing while swimming with a friend in the Jacques-Cartier River Friday.

As of June 19, the Quebec Lifesaving Society has reported 22 drownings since the start of 2020, compared to 19 in the same period last year, according to the agency's website.

In addition, a body was recovered from Beaumont in the Chaudière-Appalaches region, but it is too early to say whether it was a drowning, a voluntary act, an accident or a criminal act.

Police were informed on Saturday, around 4:30 p.m., that a body had been seen floating on the river near a rocky shore.

“Around 6:30 p.m., the firefighters removed the body of the water with their equipment. An investigator and a crime scene technician went to analyze the site and the body. It is said to be a male individual. No more details are available at this time,” said Beauchamp.

Forensic technicians will analyse and identify the body.

This report by the Canadian Press was first published June 21, 2020.