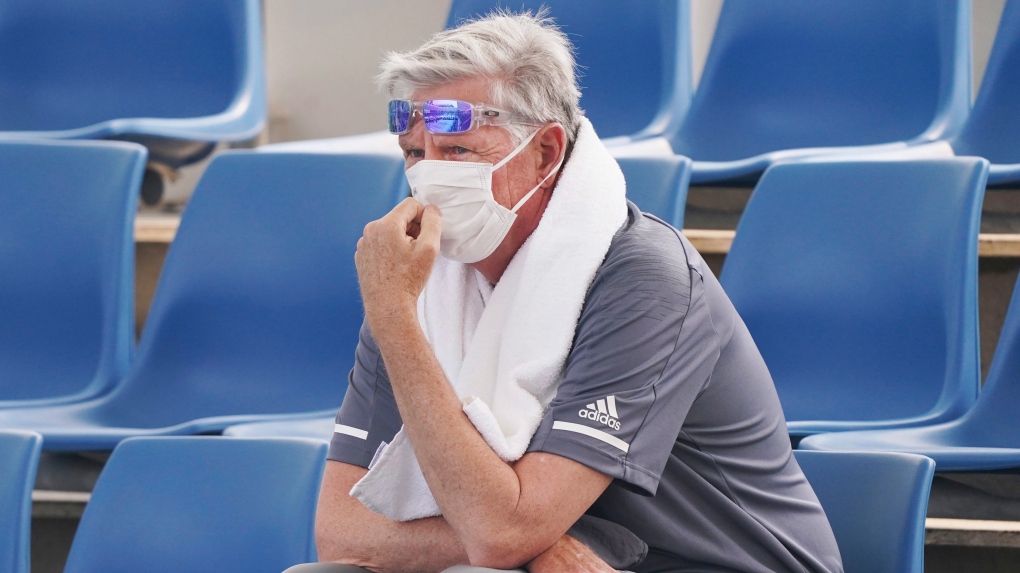 A spectator wears a mask as smoke haze shrouds Melbourne during an Australian Open practice session at Melbourne Park in Australia, Tuesday, Jan. 14, 2020. Smoke haze and poor air quality caused by wildfires temporarily suspended practice sessions for the Australian Open at Melbourne Park on Tuesday, but qualifying began later in the morning in "very poor" conditions and amid complaints by at least one player who was forced to forfeit her match. (Michael DodgeAAP Image via AP)

ADELAIDE, AUSTRALIA -- Tennis players competing in the Australian Open qualifying tournament – including Montreal's Eugenie Bouchard and Felix Auger-Aliassime – are finally getting some relief Wednesday from the tiny, noxious smoke particles that made many feel like their throats were on fire.

Since the moment play began at the season's first Grand Slam on Tuesday morning, players have had major challenges dealing with the heat, humidity and the debris caused by the wildfires that have decimated Australia.

One player, Dalila Jakupovic of Slovenia, was forced to retire in the second set of her match, while Australia's Bernard Tomic needed a ventilator during his first-round defeat.

Bouchard needed treatment after the second set of her match against Xiaodi You of China before returning to prevail 4-6, 7-6 (4), 6-1 on Tuesday.

"The conditions were tough for sure, I'm not going to lie. By the end of the second set it was tough to breathe, and (the trainer) gave me something that helped," Bouchard, from Westmount, told reporters in Melbourne. "But I felt good for the first set and a half; maybe if I'd won in two sets I wouldn't even be talking about it."

The event hasn't given any indication the schedule will change dramatically because of conditions.

Tennis Australia, which runs the tournament, says it has experts on hand to ensure the safety of people on site.

"We've definitely had tournaments in areas where there's been a lot of pollution and other things," said Bouchard, who added that it never occurred to her to stop because of the conditions.

"It's a tricky question. We're all here. We all want to play; I would love to play in more clear air. But the show must go on. We're here to do our job. It's not ideal. But our worries are definitely low on the list."

The main draw is scheduled to begin Monday.

"I imagine that the tournament is doing the best for the players. But at the same time, they sort of prove the opposite when a player has to stop the match. It was a shame to see that," he said after winning his 6-3, 7-6 (0) over Australia's James Duckworth on Wednesday.

"It's difficult. My thinking is that we don't know what's on the flip side -- everything that is involved in pushing back the qualifying in terms of money, of organization," he said. "I'd have to take everything into consideration, look at the big picture, and ask myself what I would do in Craig Tiley's position."

He played in the 2017 California Challenger and is familiar with the effects of the smoke. The lower-level Challenger tournament near Napa Valley took place in September 2017 when much of the area was evacuated.

"We started hearing that one girl (Jakupovic) had a coughing fit and retired from her match (on Tuesday), so that kind of sounded the alarm bells," she said. "Pretty quickly, we were all in discussion. We got a call organized with (tournament director) Craig Tiley to kind of fully understand the situation.

"We heard a range of things from dizziness, lightheadedness, headaches during and (after) the matches. We also heard of eyes stinging, and that it was painful to breathe. Those were the all-across-the-board symptoms."

Dabrowski, who has been playing in clear air in Adelaide and is into the doubles semifinals at an Australian Open tuneup event, said there was nothing the WTA could decree.

"Basically, we put a lot of pressure (following Tuesday's play) that this can't continue the next day if the conditions are as bad. Luckily they postponed the matches until it started to clear," she said.

The 24-year-old from Pickering, Ont., overcame a tough start to post his first career victory in Melbourne -- a 1-6, 6-3, 6-4 victory over Sebastian Ofner of Austria. He battled conditions, which he described as like smoking a cigarette.

"The biggest difference playing in the smoke is that your lungs start to burn and dry out after about five minutes of play. After you have a sip of water that goes away, but you constantly are feeling like your throat is dry and Itchy," Schnur said. "I definitely don't think we should have gone on court today -- at least not until 2 p.m. The first hour was the worst."

On the plus side, the rain appeared to clear the air -- and the temperature certainly dropped.

Professional tennis players aren't strangers to poor air quality; regular ATP and WTA Tour stops in Shanghai and Beijing, China, for example, are notorious for it.

Schnur's previous experience came at California's Challenger tournament. The haze of the smoke hung over the court during play and the line umpires wore masks during matches.

"Smoke particles are bigger than what we see in China with the air pollution. So the negative effects are more pronounced, which is what we discovered (Tuesday)," Dabrowski said. "There are a lot of question marks about air quality. Apparently the science is not so exact, so we don't really know the effects, both short term and long term.

"I just think that health is No. 1, and any time there's a possible risk of health effects, we (should) take a pause," she added.

Dabrowski believes that if the matches being played this week were main-draw clashes involving top-ranked players, the organizers would not have let play continue.

'GOT TO COME FROM THE TOP GUYS'

Schnur said it was incumbent upon the biggest names in the sport to be the voice for lesser-known players.

"It's got to come from the top guys -- Roger (Federer) and Rafa (Nadal) are a little bit selfish in thinking about themselves and their careers," Schnur said. "Because they're near the end and all they're thinking about is their legacy and they're not thinking about the sport itself and trying to do what's good for the sport. So those guys need to step up."

As the qualifiers were coughing and struggling outside, the top stars in the game -- Federer, Novak Djokovic and others -- were practising in air-filtered, air-conditioned comfort inside one of the three stadiums in Melbourne Park that have retractable roofs.

Dabrowski pointed out that a horse race was cancelled in Melbourne on Tuesday, and an exhibition match at a nearby venue involving Maria Sharapova was cut short.

"When the news is telling you to stay inside, to keep your pets inside, why are we exerting ourselves to the maximum?" she said. "There's everything at stake for these players in qualifying. This is their ticket to potentially break through into the top 100, make the main draw, be able to support themselves for the rest of the season. So of course they're going to play."

This report by The Canadian Press was first published Jan. 15, 2020.