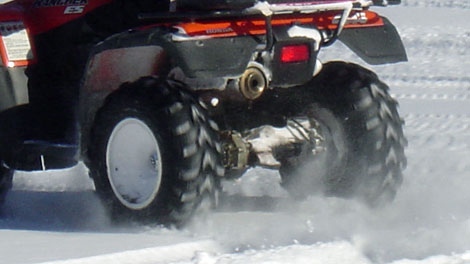 Three people on an all-terrain vehicle (ATV) were riding on Lac Fournière in the municipality of Rivière-Héva, in Abitibi-Témiscamingue, when a nightmare occurred Thursday afternoon.

A man and a toddler were rescued from the icy waters, but a woman lost her life.

According to initial information from the Sûreté du Québec (SQ), the icy surface of the lake gave way while the three people were on the ATV.

The 23-year-old woman was missing for a few moments before being located by emergency services. She was transported to a hospital where she was unfortunately pronounced dead.

The 24-year-old man and the child were transported to a hospital. They are both suffering from hypothermia, but their lives are not in danger.

"The side-by-side all-terrain vehicle in which they were riding was submerged in water when the ice broke under the vehicle," said SQ spokesperson Hélène St-Pierre.

An investigation is underway to establish the causes and circumstances of the accident.

This report by the Canadian Press was first published in French on Dec. 9, 2022.