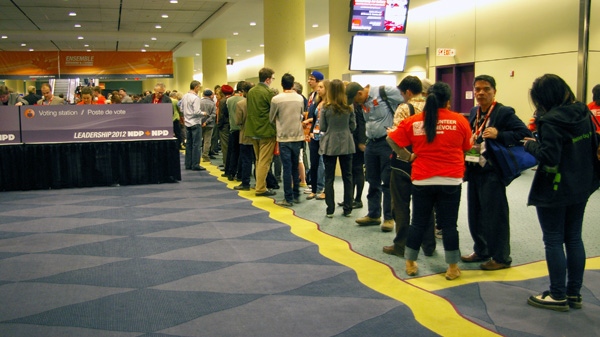 NDP delegates line up to vote in the third round of voting at the NDP leadership convention in Toronto on Saturday, March 24, 2012. (Phil Hahn / CTV News)

TORONTO - The selection of the next federal NDP leader has been delayed for hours due an attempted cyber-attack on the party's electronic voting system.

Party officials would say publicly only that the system was overwhelmed due to an unanticipated crush of voters all trying to cast their online ballots at the same time.

But that explanation has been met with skepticism, since fewer than 10,000 New Democrats actually voted electronically today; the vast majority, some 56,000, cast their ballots in advance.

The party hired Scytl, a Spanish-based company that specializes in electronic voting security, to run the online voting system.

Results from the second round of voting were delayed about two hours in order to make sure those members who are not on the leadership convention floor are able to cast a ballot.

"The party has informed Nathan's campaign that there was a cyber attack on the voting system," Heath said in an interview.

"They did isolate it to two or it may have been three IT addresses but they've resolved it."

Former NDP national director Brad Lavigne would only say that a crush of demand caused problems. "The delays are due to a higher than anticipated volume."

For those who are voting in person at the convention, lengthy lineups at voting stations formed as the delays pushed balloting well into the afternoon.

The third round of voting has been extended until 5:40 p.m. ET.

Front-runner Thomas Mulcair leads after the second ballot with 38 per cent of the vote, followed by Brian Topp at 25 per cent and Nathan Cullen at 20 per cent; Peggy Nash, Paul Dewar, Martin Singh and Niki Ashton have all been knocked out of the race.