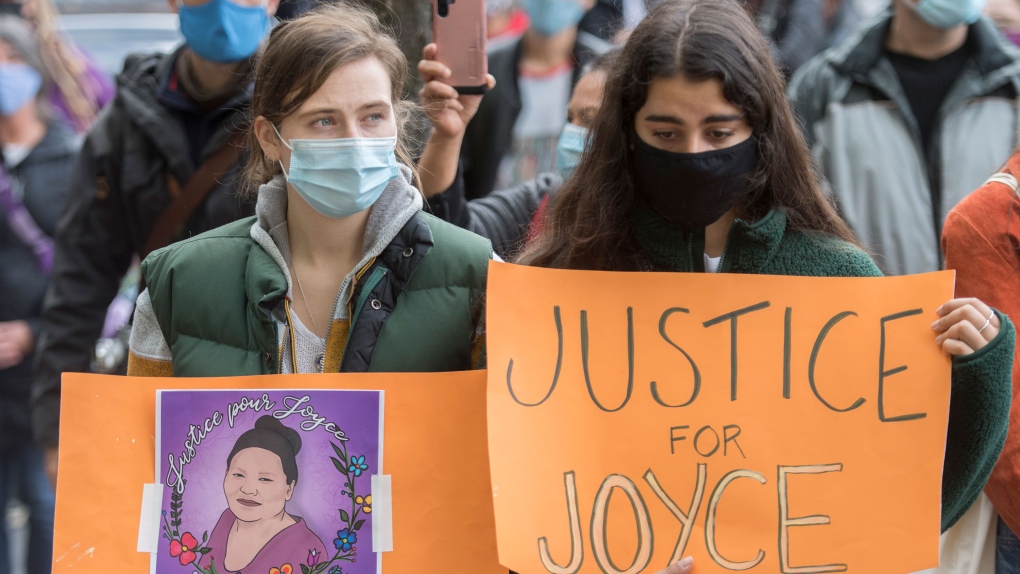 People take part in a protest called ‘Justice for Joyce’ in Montreal, Saturday, October 3, 2020, where they demanded Justice for Joyce Echaquan and an end to all systemic racism. Echaquan died in a Joliette Hospital earlier in the week. THE CANADIAN PRESS/Graham Hughes

MONTREAL -- The grand chief of the Atikamekw Nation said he had a positive meeting with Quebec Premier Francois Legault Monday but he's still waiting to see action.

Grand Chief Constant Awashish and other community leaders met with Legault to discuss the death of Joyce Echaquan, an Atikamekw woman who filmed staff insulting her as she lay dying in a Joliette hospital last week.

"He was listening, I don't know if he (understood) everything but I know he was listening," Awashish told reporters outside the premier's Montreal office.

The Atikamekw community wants an apology from the government and the ability to participate in a public inquiry into Echaquan's death, leaders have said. The incident has been described by members of Indigenous communities as an example of systemic racism in Quebec's public service.

While Legault has described the actions of the Joliette hospital staff members as racist, he has repeatedly maintained that systemic racism doesn't exist in Quebec.

"In my eyes, and in the eyes of many experts, there's a systemic problem in the public services," Awashish said after the meeting. "We didn't agree on the definition of 'systemic' but I think we speak the same language, just differently."

But even if the government doesn't acknowledge systemic racism, Awashish said he believes Legault could bring about positive change.

"He has the power to do it, now we're looking for the will," he said.

Legault said later there was agreement that the staff at the Joliette hospital would be trained on how to better offer services to Indigenous people, and the training would be offered throughout the health-care network.

The premier also said his government would create a public awareness campaign on the importance of fighting racism. "It's time we move toward action," Legault said.

Earlier on Monday, the lawyer for Echaquan's family says he hopes the video of her suffering will help the public appreciate the discrimination faced by Indigenous people.

Jean-Francois Bertrand said he's heard from non-Indigenous people who told him they knew that members of First Nation communities suffer discrimination, but it remained an abstract concept. For those people, he said, seeing the video of the mother of seven being insulted was a wake-up call.

Bertrand said in an interview on Monday he supports the recent decision by deputy premier Genevieve Guilbault to open a public inquiry into Echaquan's death. "It's a very important step."

The lawyer said he plans to ensure the family obtains "interested party" status during the inquiry, which he said will enable it to call witnesses and introduce evidence.

On Friday, Bertrand said he would sue the hospital on behalf of the family and file complaints with the police, the order of nurses and the human rights commission.

Bertrand said Monday he also wants to see an investigation into the Joliette hospital. The regional health authority that runs the hospital has said it will conduct an internal investigation and that the nurse and the patient-care attendant heard insulting Echaquan in the video have been fired.

A private funeral is scheduled for Echaquan on Tuesday in the Atikamekw community of Manawan, about 250 kilometres north of Montreal.

This report by The Canadian Press was first published Sept. 5, 2020.