MONTREAL -- Due to the COVID-19 pandemic, a backlog of almost 150,000 Quebecers are waiting for non-essential surgeries, but the government is hoping to reduce that substantially by March 2023.

Under a strategy unveiled on Wednesday, the Quebec Health Ministry revealed it hopes to reduce that number to 100,000, but it could take a while.

The plan would see things get a bit worse before they get better, projecting the wait list would go up to 150,000 from 145,000 by October of this year.

A graphic released by the Health Ministry notes that prior to the pandemic, the wait list was at 125,000 people. Of those, 21,000 had been waiting more than six months and 4,000 for over a year.

Despite COVID-19 cases dramatically shrinking, Health Minister Christian Dube had previously said Quebecers should not expect the healthcare system to catch up on elective surgeries until fall, saying healthcare workers needed a much-deserved break. On Thursday, he reiterated that point, saying the pandemic resulted in Quebec losing "a lot of personnel and we need to get this personnel for the ones that are still there. We need to get them rested, because they deserve to be rested. When they are rested at the end of the summer, the plan that we will have designed with them, with the unions, with the specialists, will be a realistic plan."

However, patients rights advocate Paul Brunet said that understaffing and playing catchup will result in deaths.

"How many cancer patients will have lost because we would not have diagnosed them sufficiently fast?" he said. "How many (patients with) heart disease will we have lost? We should tell everyone we will lose patients. Hopefully we will not, but we will work on it." 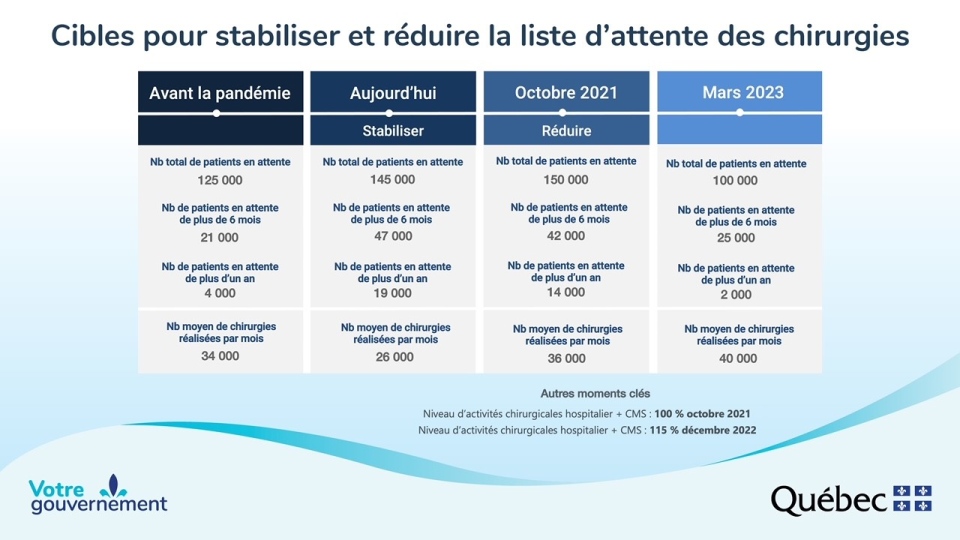 Prior to the plan's release, the ministry came under fire from some of the political opposition in Quebec City, with Quebec solidaire co-spokesperson Gabriel Nadeau-Dubois saying no plan will work if the government continues to ignore the province's serious shortage of health care workers.

Nadeau-Dubois noted the Legault government must "massively" improve working conditions if it wants to attract people to the field.

"These questions are unavoidable," said Nadeau-Dubois.

Last week, Dubé indicated that he wants to implement a plan to catch up on surgeries by the end of August to give health care professionals a break this summer.