As Quebec rolls out COVID-19 ad campaign, experts wonder if it will reach target audience 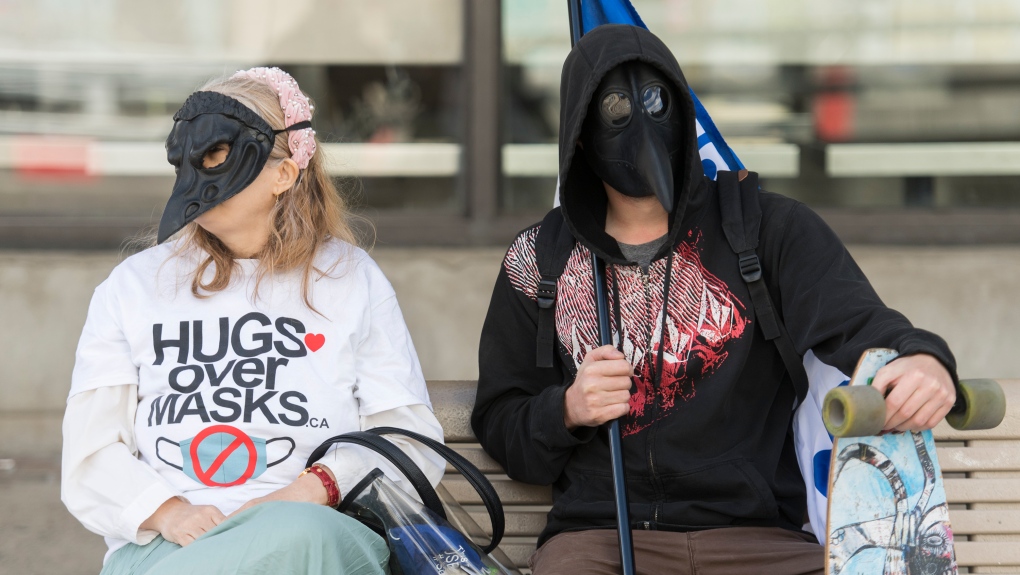 People wear masks during a demonstration opposing the mandatory wearing of face masks and coverings in Montreal, Saturday, September 19, 2020. THE CANADIAN PRESS/Graham Hughes

MONTREAL -- Quebec has begun rolling out a COVID-19 advertising campaign aimed at putting a human face on the deadly virus and reaching those who discount its severity.

The ads -- the first of which was released Tuesday night -- include testimonials of those impacted directly by COVID-19.

In the first spot, the camera focuses on Francis, a general contractor who recounts spending 45 days in hospital, including 12 in a coma. He underwent a tracheotomy and now breathes through an opening in his neck.

Francis explains the virus was contracted after chatting with a friend in a doorway. Three days later, symptoms set in: fever, fatigue and difficulty breathing, and now he's no longer able to work.

With public health officials saying the province hit hardest by COVID-19 is experiencing a second wave, efforts have intensified to reach a segment of the population that has felt the virus's risk is overhyped.

But some marketing experts do not believe the government is striking the right tone or that the message will reach the right people.

"Fear is not a good motivator," said Benoit Duguay, a professor in the Universite du Quebec a Montreal's school of management.

Robert Soroka, a marketing professor at Concordia University's John Molson School of Business, says the ad would have been more effective with an accompanying message at the end.

"Fear appeals work, but they are most effective when you provide the audience with a solution," Soroka said.

The other issue is that the recent spike in infections has been most pronounced among younger people, who won't necessarily see themselves in the first advertisement featuring a middle-aged contractor.

"They absolutely need to hear it from social influencers, from people who are respected by that segment of the population," Soroka said. "Right now, for that group, they're not drinking the Kool-Aid ... and certainly their peers are not reinforcing the message the government is trying to convey."

Those influencers or celebrities that would best reach those age groups don't necessarily want to dilute their own brands and dissuade activities that generate income for them, Soroka said.

Premier Francois Legault shared the 30-second spot featuring Francis on Twitter, stressing that he is not an actor. "He is a Quebecer, like you and me, who caught COVID-19 and got very sick," he wrote.

Laurette Dube, a marketing professor at McGill University's Desautels faculty of management, noted that many of those skeptical of the government responded negatively to the premier's tweet of the ad.

"The research on fear typically kind of says two things: not enough doesn't get attention, too much, you get this reaction that is not processed," Dube said.

She said that if attitudes are very polarized, people at one extreme are already convinced. And with those at the other extreme, "you can have the reaction I've read in those tweets (responding to Legault)."

Duguay said that if the province's goal is to stop large gatherings, a more effective advertisement would show what gatherings that follow the rules look like.

"It is preferable to have positive than negative appeals in advertising," he said. "Fear has never been a proven change factor."