MONTREAL -- Police and women’s groups from Chateauguay and Mercier gathered for a memorial Wednesday morning for the ten women murdered, allegedly from conjugal violence, this year.

Those in attendance held a moment of silence.

The vigil comes amid a rash of alleged femicides, the latest in the South Shore community of Mercier. The bodies of Richard West, 50, and his wife Dyann Serafica-Donaire, 38, were found earlier this month in an apparent murder-suicide.

“This is exactly what we need, we need to be in partnerships, we need to be together, and to let everyone know it's happening and we need help” said Tania Howes, who works with Re-Source, a shelter for immigrant women victim of domestic violence.

To call attention to the feminicides, organizers posted small markers bearing the names and pictures of each victim. Some couldn't hold back their tears as they left flowers and lit candles.

To help the situation, Quebec announced last week that it is investing $222.9 million over five years for a variety of measures for survivors, including $92 million for women’s shelters.

Women's shelters have to turn away between 10,000 and 15,000 women each year due to lack of space as occupancy rates hover close to 100 per cent virtually year-round. 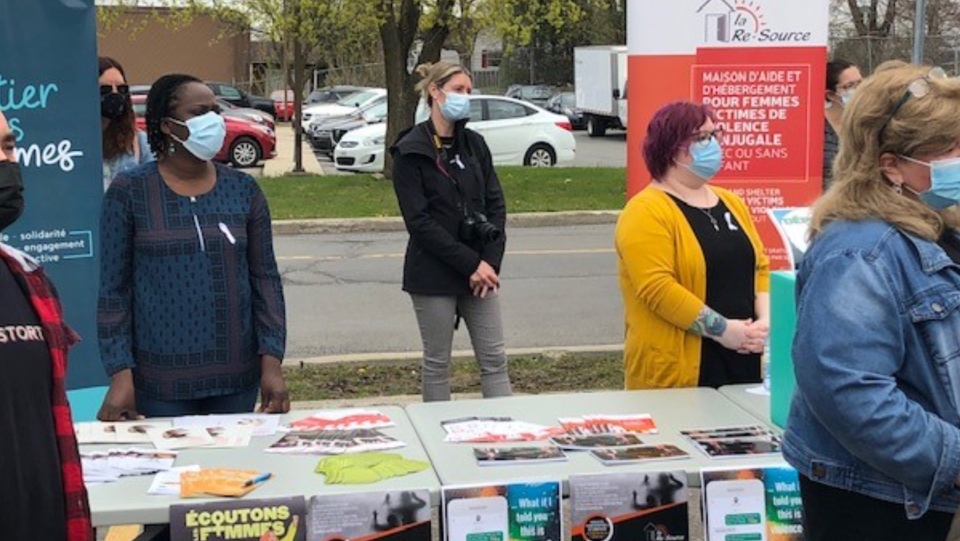 Things have improved in recent decades, some activists say, but so much remains to be done.

“Back in the 70s and 80s it was like, ‘well, that's just part of life,’” said Brenda Shanahan, member of parliament for Chateauguy-Lacolle. “This is not acceptable.”

Officers, they say, are trained to help them.

“Our officers are trained to have an open dialogue,” said Chateauguay police chief Yannick Dufour, because “if we do not have the collaboration of the victim, in certain circumstances, it's very hard to treat this situation.”

Advocates have also stressed the need for violent men to have access to therapy.

“These men aren't proud of how they behave, so we listen without judging” says Nicolas Renaud, of Action sur la Violence et Intervention Familliale, who works with violent men.

“That way, the aggressors can start their own reflection and therapy.”