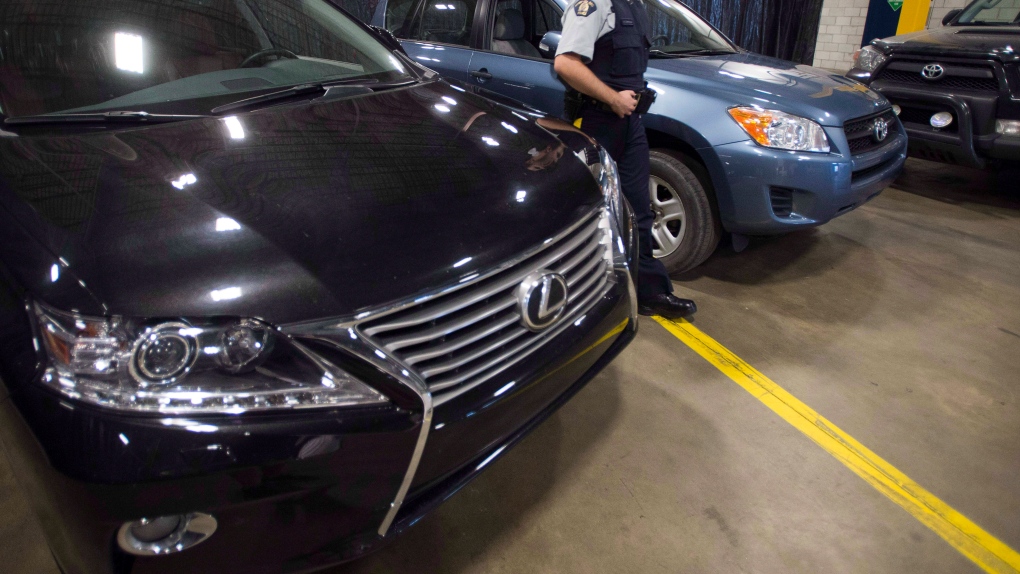 FILE PHOTO - An RCMP investigator walks past some of the luxury vehicles that were seized from a containers at a news conference Thursday, July 17, 2014 in Montreal.THE CANADIAN PRESS/Ryan Remiorz

The four suspects were arrested on May 31.

Two of them, André Ferreira Dedeus and Andres Dario Olea Ortiz, both 27, are facing several charges relating to motor vehicle theft, conspiracy, possession of burglary tools and breach of condition. They have appeared at the Montreal courthouse and remain in police custody.

The other two suspects, aged 26 and 27, were released on a promise to appear.

The SUVs were stolen between April and December 2021, and police say they were intended for export overseas. Several were found inside containers at the Port of Montreal.

Police are offering the following tips for car owners:

The investigation into the theft ring involved officers from the Montreal police, Quebec provincial police, and the Laval and Terrebonne police departments.

The police investigation is continuing, and investigators say they are actively seeking other suspected collaborators. Anyone with information is invited to call 911, their local police station or reach out to Info-Crime Montréal anonymously and confidentially at 514 393-1133 or via infocrimemontreal.ca.

Almost 100 years after its extinction, the Tasmanian tiger may live once again. Scientists want to resurrect the striped carnivorous marsupial, officially known as a thylacine, which used to roam the Australian bush.