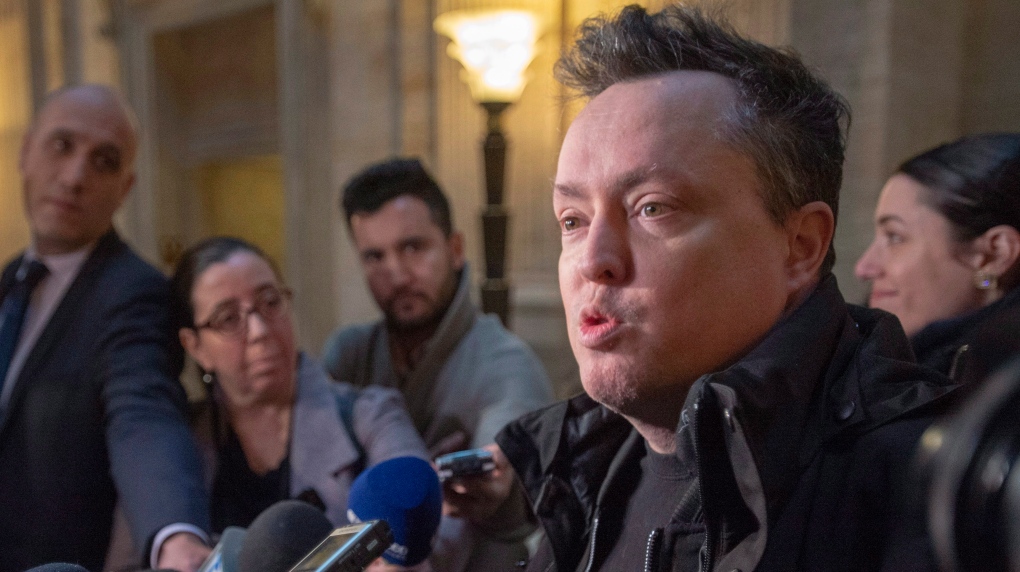 Comedian Mike Ward speaks to the media at the Quebec Appeal Court Wednesday, January 16, 2019 in Montreal. The Court is hearing arguments about whether Ward, who joked of drowning a disabled boy, Jeremy Gabriel, should have to pay damages to him and his family. THE CANADIAN PRESS/Ryan Remiorz

MONTREAL -- Quebec comedian Mike Ward is seeking permission to take his free speech case to the Supreme Court of Canada.

In November, Quebec Appeals Court judges rejected part of the appeal of a comedian who joked about drowning a disabled boy. In a split decision, two of three judges ordered him to pay $35,000 to Jeremy Gabriel because of a joke he told at shows between 2010 and 2013. The judges did, however, drop the $7,000 in damages he was ordered to pay Gabriel's mother, ruling that the law didn't specify that discrimination against one person extended to that person's loved ones.

On Wednesday, Ward's lawyer Julius Grey confirmed that they are applying for the case to be heard before the Supreme Court of Canada, saying the goal is to "deflate the sacred cows of Quebec society," of which Gabriel was one.

In the Appeals Court decision, two of the three judges ruled Ward's comments about Gabriel's disability compromised the young performer's right to the safeguarding of his dignity and could not be justified, even in a society where freedom of expression is valued.

Gabriel has Treacher Collins syndrome, a genetic disorder that causes facial deformity and hearing impairment. He caught the public's attention because of his dream of becoming an internationally famous singer, and he performed for Pope Benedict, Celine Dion and at a Montreal Canadiens game.

Mike Ward is an award-winning stand-up comedian who has "achieved great popularity in and also outside Quebec," the Supreme Court filing reads.

Ward's lawyer argues that stand-up comedy is "often mordant, crude and even cruel" and usually appeals to the public "only when it is biting, sarcastic and even outrageous."

The application states that Ward "at all times invoked both his artistic freedom and the more general freedom of expression," and denied any existence of discrimination.

According to his lawyer, the questions that are of national importance are these:

Ward has said he would refuse to pay the fine and that comedy is not a crime.