Around 73,000 Quebec teachers ready to strike again on April 27 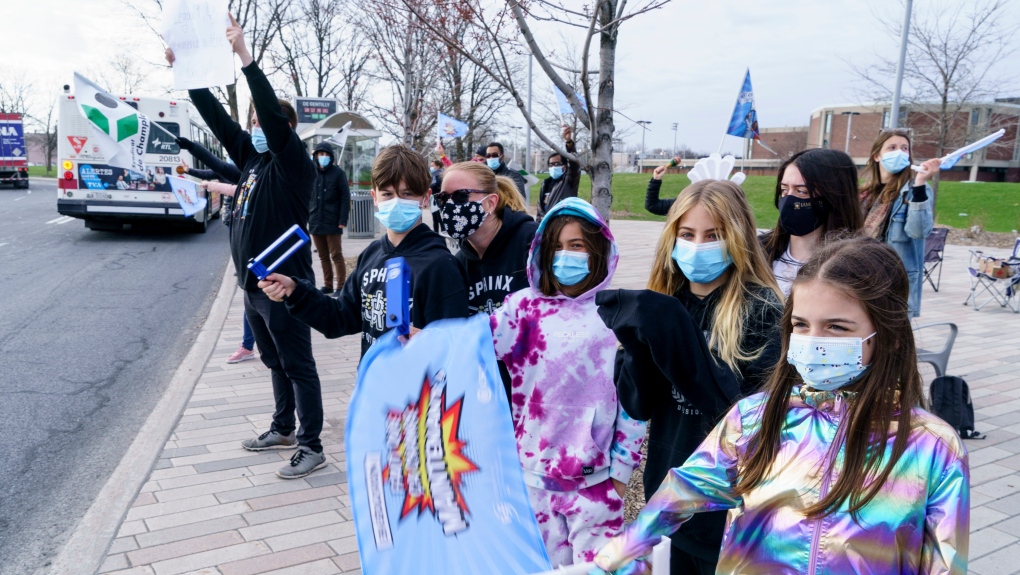 Students join teachers in demonstration outside a school during a morning walk-out in Longueuil, Que. on Wednesday, April 14, 2021. Teachers are striking to express dissatisfaction with negotiations with the Quebec government that have gone on for more than a year. THE CANADIAN PRESS/Paul Chiasson

MONTREAL -- The 73,000 teachers represented by the CSQ union are planning a second strike lasting a few hours on April 27.

The FSE (Fédération des syndicats de l'enseignement) announced that the walkout will take place from 2:45 p.m. to 5 p.m. on that day

The FSE is affiliated with the Centrale des syndicats du Quebec (CSQ).

Teachers already walked out for a few hours last Wednesday.

School administrators unsuccessfully applied to the Quebec Superior Court to prevent this type of partial strike because it was causing them headaches in terms of organization. It complicates the organization of school transportation and daycare services.

After the Superior Court dismissed the case,  administrators turned to the Administrative Labour Tribunal, but, in the end, after discussions between them, the parties did not have to be heard in court, and the strike lasting a few hours took place.

CSQ members voted on a strike mandate for "the equivalent of five days" strike action.

FSE president Josee Scalabrini said that negotiations for the renewal of the collective agreement has made progress, but that this was not enough to stop the strike.

In a statement, she said she hoped that since school administrators have about 10 days' notice before the 27th, they will be able to get organized "this time" and plan better for strike day.