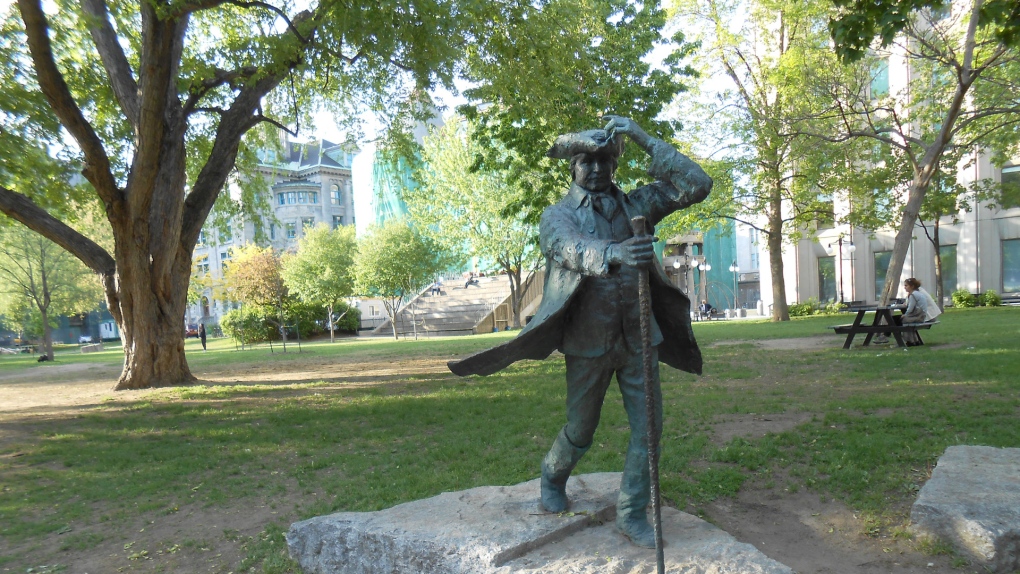 A statue of James McGill, British businessman and founder of McGill University, on the university's campus. The contribution Anglophones and minorities made to building Quebec are being omitted from a new history course, critics say. (Jeangagnon)

MONTREAL -- People petitioning to remove some of Montreal’s statues are sending their attention in a new direction, a few blocks northeast of the Sir John A. Macdonald monument near Bonaventure metro.

A new petition is asking McGill University to take down its statue of James McGill, which is currently in a prominent place in the campus walkway to Sherbrooke Street.

The petitioners—about 1,500 of them as of Friday evening--want the statue replaced with a tree.

“It can be any type of tree,” the petition says. “Any tree would be better than looking at James McGill.”

McGill was a slave owner, whose slaves were both Black and Indigenous, and he “used the wealth gained by their exploitation to start McGill University,” wrote Hannah Wallace, who started the petition.

“McGill University makes no mention of this on their website, instead romanticizing his boring life.”

Students have lobbied before for the statue to be removed, including in student editorials in both student papers, the McGill Tribune and the McGill Daily, last spring. Campus statues of Queen Victoria as well as McGill were both vandalized last year.

Many petition-signers said they were excited about the idea of a tree.

“Would much prefer a nice willow or possibly an elm,” wrote Nicole Stinson.

“Trees are not racist.... James McGill was,” said Celia Zuberec.

Another petitioner said it’s especially troubling to maintain a statue of someone who enslaved Indigenous people in a city so tightly interwoven with Indigenous life.

“The monster of a human shouldn’t be represented with a statue while thousands of Indigenous peoples are being left unrepresented on their own territory where McGill is situated,” wrote Karonhianoron Curotte.