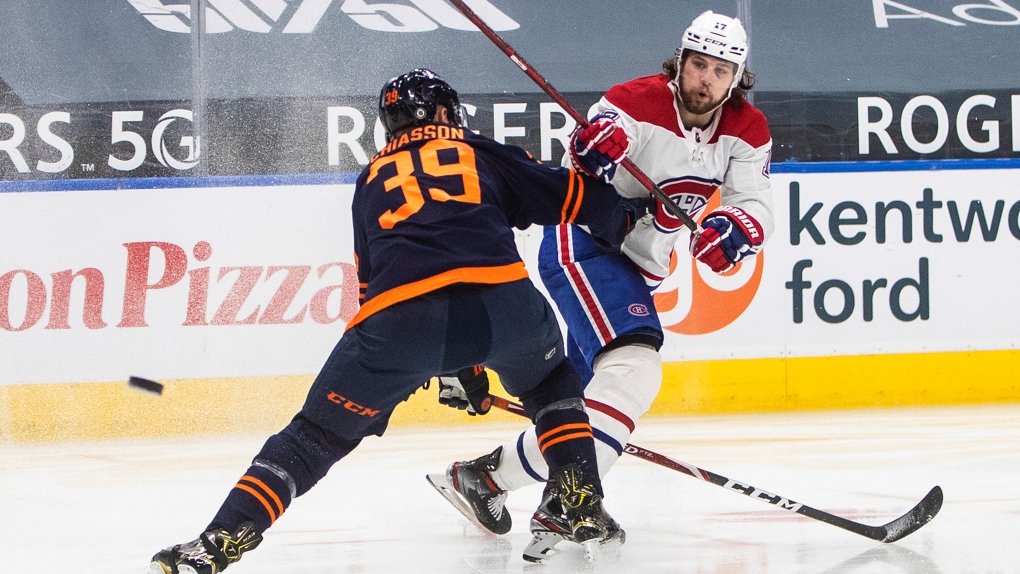 EDMONTON -- Josh Anderson set the tone Wednesday morning by encouraging his teammates to up their intensity as they look to solidify a playoff spot.

He did the same thing in warmups with a couple pointed words for Edmonton forward Alex Chiasson -- the man responsible for knocking Carey Price out of Montreal's lineup.

And when the puck dropped, the big winger was once again in the middle of the action.

Anderson scored twice as the struggling Canadiens survived a late flurry to defeat the Oilers 4-3 on Wednesday night in another physical, playoff-style matchup between the teams.

"We can't wait around any longer, these games are way too important," Anderson said. "Tonight was the right direction (with) us playing hard and the right way.

"We've just got to continue to build on that."

"We played hard and we played the right way. We've just got to continue to build on that."#GoHabsGo | @985Sports https://t.co/sgmCUViTRI

Tyler Toffoli and Artturi Lehkonen had the other goals for Montreal (20-15-9). Jake Allen made 22 saves as the Canadiens picked up just their third win in the last nine games to move eight points clear of the Calgary Flames for the North Division's fourth and final post-season berth. Jeff Petry and Tomas Tatar had two assists each.

Connor McDavid, with a goal and two assists, Ryan Nugent-Hopkins and Jesse Puljujarvi replied for Edmonton (27-16-2), which got 27 stops from Mike Smith. The Oilers, who beat Montreal 4-1 on Monday and scored two late goals to make things interesting 48 hours later, missed a chance to leapfrog the Winnipeg Jets for second in the standings.

Montreal and Edmonton combined for 87 hits after putting up 67 on Monday.

"That was a tight-checking game on both sides," Nugent-Hopkins said after missing the last four contests with an upper-body injury. "They capitalized on a couple opportunities.

"We were just a little short at the end."

The Canadiens were minus Price because of a concussion after he got bumped up high by Chiasson in Monday's first period. The former Hart and Vezina trophy winner, who will be out at least a week, had just returned to Montreal's lineup Saturday following a six-game absence with a lower-body injury.

Anderson made a point of chatting with Chiasson in warmups before Corey Perry fought the Oilers winger early in the first period.

"You want to get engaged as soon as you step on the ice," Anderson said. "I thought we all did a good job of that, just letting him know that we're coming out after they hurt our best goalie -- the best goalie in the league. You can't do that to our top players, and they're going to pay for it.

The Canadiens did a good job of containing McDavid and Leon Drasaitl, who sit No. 1 and No. 2 in the NHL scoring race, most of the night thanks to some strong play from the defence pair of captain Shea Weber and Ben Chiarot.

"You could see the frustration building," Anderson said.

McDavid did get on the board when he tied the game 1-1 with his 25th goal of the season on a breakaway at 3:09 of the second period, but Anderson responded just 11 seconds later when he bullied his way past Adam Larsson and snapped his 16th shortside on Smith.

"Good luck stopping that guy coming down the wing -- 230 pounds of muscle and no fat, and a guy with a hell of a shot," Allen said. "He's a game-changer when he gets his feet going and is playing hard and heavy."

"It was key we jumped back on the horse and didn't give them anything else," he said. "They're all about momentum."

Montreal, which entered 2-6-0 over its last eight and had scored just 12 times since losing heart-and-soul winger Brendan Gallagher to a broken thumb April 5, finally connected on its bumbling power play at 8:10 of the third when Toffoli jumped on a turnover and buried his 22nd to snap a 3-for-35 run with the man advantage.

Anderson made it 4-1 with 4:47 remaining when he backhanded his 17th on a sequence that stood after a challenge for goalie interference on Smith.

Nugent-Hopkins scored his 13th on a power play with 2:12 left and Smith on the bench for an extra attacker, and Puljujarvi added his 12th late, but Montreal held on despite some nervy moments.

"It was a hard-fought battle," Oilers head coach Dave Tippett said. "But we came up a little short."

Having scored just 18 combined goals during a 3-7-0 stretch coming into Wednesday, Montreal was the better team in the first and got rewarded late in the period when Lehkonen made a nice backhand move to score his fourth.

The Canadiens now head south to Calgary where they'll play three crucial games against the Flames. The Oilers don't suit up again until Monday -- another long break after playing just 11 times in 32 days because of various scheduling changes related to the pandemic -- when they visit the Jets for the first of two in Winnipeg.

"We've got to look back at this game and continue to build on that performance," Anderson said. "We played a solid game, everybody was engaged."

Notes: Oilers winger Zack Kassian was injured in the first period and didn't return... Edmonton and Montreal will meet May 10 and 12 at the Bell Centre to wrap up their regular-season series... Acquired from the Detroit Red Wings prior to the NHL trade deadline and having served the mandatory seven-day quarantine, defenceman Jon Merrill made his Canadiens debut... Oilers blue-liner Dmitry Kulikov worked out with his new team for the first time Wednesday morning since coming over in a deal with the New Jersey Devils. It's expected he'll be available against Winnipeg next week.