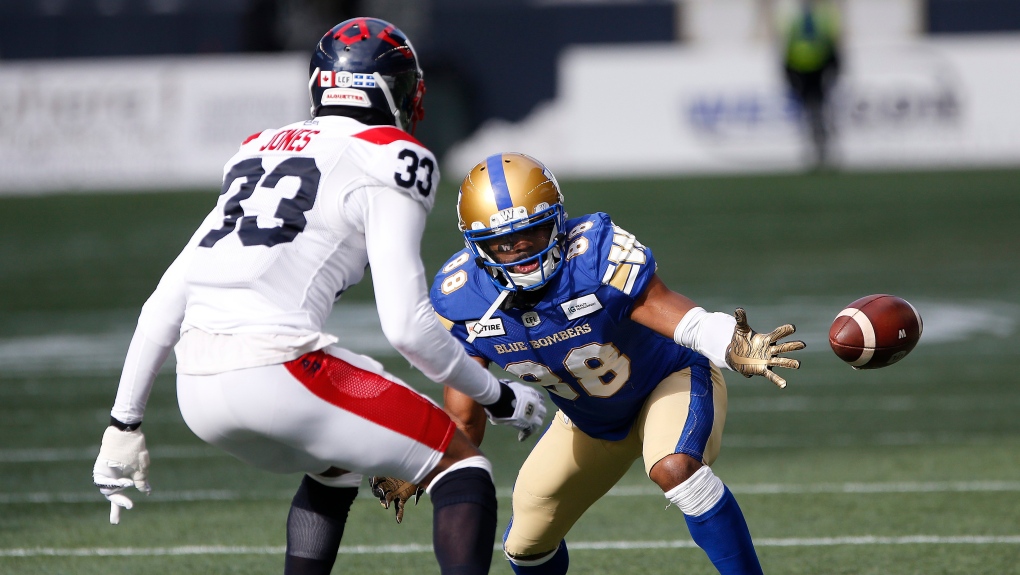 Nick Taylor's interception for a touchdown was a highlight but the Blue Bombers relied more on a solid ground game to beat the Montreal Alouettes 35-24 on Saturday, getting a little payback after their last meeting when Winnipeg surrendered a 20-point lead.

Andrew Harris and Drew Wolitarsky both had TDs as the Bombers (10-6) took a five-point lead into the second half Saturday. Kicker Justin Medlock added three field goals before Taylor's interception in the fourth and another with less than two minutes left in the game.

A 90-yard runback by Mario Alford was Montreal's (8-7) lone touchdown in the first half. Jake Wieneke added another in the third quarter and Boris Bede added a field goal.

Quan Bray had a final score for the visitors with less than a minute left.

The Alouettes' loss clinched first in the CFL's East Division for the Hamilton Tiger-Cats. The Toronto Argonauts and Ottawa Redblacks have been mathematically eliminated from the post-season.

The weather turned out to be a non-issue as the game started under sunny skies, with only piles of snow on the sidelines as a reminder of the early wintry blast that gripped Winnipeg the previous two days.

The sparse unannounced attendance was another reminder of the poor conditions heading into the game, with some highways into the city still closed Saturday morning. Many urban back lanes were impassable for anyone without four-wheel-drive and some streets still blocked by fallen trees from heavy, wet snow.

Harris scored at 3:31 of the first on Winnipeg's first 69-yard drive of the game, capped by his 16-yard run. Harrris added 105 yards in the first half alone to his league-leading total of 1,095 as he provided much of the Blue Bombers offence.

The Alouettes responded in the first quarter with a seven-play, 52-yard drive that got them within scoring range but were stymied by the Winnipeg defence. Montreal had to settle for a 30-yard field goal from Bede.

After the Bombers stalled in their own zone on the next series, Montreal grabbed a 10-7 lead on the 90-yard runback touchdown by Alford.

Wolitarsky restored Winnipeg's lead in the second with his 15-yard catch at 8:36 to make it 14-10, but Allard then let the subsequent kickoff go between his legs into Montreal's end zone and surrendered a single to make it 15-10.

Montreal took a 25-yard loss a few minutes later after Adams fumbled a poor snap and appeared to spike the ball in frustration.

Streveler's attempt to extend Winnipeg's lead in the first half died in the final 16 seconds when his attempted pass to Darvin Adams in the end zone was intercepted.

Wieneke's 30-yard catch from Adams put Montreal back in the lead at 4:31 of the third quarter, making it 17-15 but it was short-lived.

A 75-yard runback by Janarian Grant put Winnipeg within scoring range and, after Streveler threw two incomplete passes, Medlock connected with a 43-yard field goal to make it 18-17 for the Bombers.

Mistakes continued to hurt Montreal in the second half when the O-line failed and Bede was sacked before he could punt the ball, leaving it on the Alouettes 30-yard line and leading to a 14-yard field goal from Medlock.

After Adams was intercepted late in the third, the Bombers got close enough for Medlock to add a 42-yarder at 12:14, making it 24-17.

After his second interception, Taylor then took the ball 37 yards for Winnipeg's third touchdown of the game at 2:04 in the fourth quarter.

Streveler's second interception midway through the final quarter was stopped from leading to a touchdown or field goal for Montreal when Adams Jr. was picked off in the end zone by defensive back Chandler Fenner.

Medlock kicked a 46-yard field goal at 13:08 and Montreal also conceded another single on a punt to complete scoring for the Bombers.

The Alouettes gained another chance with less then a minute left when they forced Harris to fumble and won a challenge that ruled they were the last to touch the ball.

This report by the Canadian Press was first published Oct. 12, 2019.