QUEBEC CITY -- Amid major staff shortages, Quebec will cut cheques to health-care workers in a bid to strengthen a public network put under serious pressure by the pandemic.

The province will inject $1 billion into the network. That money will be given out as lump sums between $12,000 and $15,000 for new staff, including those working in part-time who move to a full-time schedule, and those returning to the public system after having left.

The province has been promising a bold update to the health-care system for several days.

As the Quebec wades through a pandemic fourth wave, a shortage of nursing staff has pushed those in the public system to complain of poor working conditions, where overtime shifts have become regular.

A shortage of 4,300 nurses has driven the health network to a critical juncture as coronavirus hospitalizations gradually increase, according to the premier.

“We ended up with a situation where the quality of life of full-time nurses is not acceptable anymore,” he said.

In combination with the bonuses, the province says it wants to reduce overtime for public nurses. To do that, private-sector employees will be called to fill "unfavourable" shifts like evenings, nights, and weekends.

More staff will be hired to take on administrative tasks, relieving nurses from that sort of work. 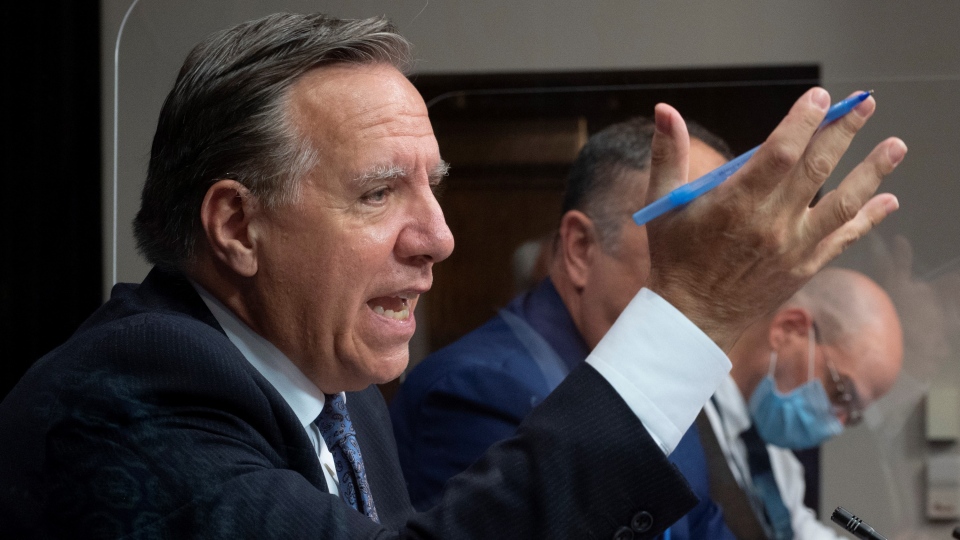 Quebec Premier Francois Legault speaks at a news conference, Thursday, September 23, 2021 at the legislature in Quebec City. The government unveiled its plan to bring back nurses into the health system. THE CANADIAN PRESS/Jacques Boissinot

Union leaders issued a public statement Thursday evening in support of the bonuses, but didn't hold back in demanding more support for other workers in the health-care system.

"The health network is not only based on nurses, but also on a whole set of people who occupy different professions," wrote Quebec Workers Federation (FTQ) President Daniel Boyer.

"The workers in the network are exhausted," he said. "It is a step in the right direction, but much remains to be done. It does not solve all the problems."

Others warned public sector incentives could pull workers away from the private system.

"We fear that this measure will siphon off the already limited nursing staff from private residences for the elderly, private CHSLDs and intermediate resources," wrote Quebec Union of Service Employees (SQEES)-FTQ President Syvie Nelson.

DUBÉ RENEWS CALLS TO GET VACCINATED

Dubé once again renewed calls to residents who haven’t gotten vaccinated to sign up for the shot.

He said earlier this week Quebec’s hospitals can’t afford to add more patients without forcing others to postpone urgent operations.

Unvaccinated people in Quebec are more than 34 times more likely to be hospitalized after catching the virus.

Meanwhile, the deadline for health-care staff to get vaccinated is looming.

Workers will face suspension without pay if they aren’t fully vaccinated by Oct. 15, which could trigger a significant cut in staff as thousands still don’t have both doses.

There are an estimated 20,000 unvaccinated employees in the network, at least half of whom provide direct patient care.

LISTEN ON CJAD 800 RADIO: Is the billion-dollar plan to bring back nurses going to work?