Alice, the affectionally-named auger used to build part of the REM light rail system, has completed her journey.

The state-of-the-art machine has finished boring the 2.5 km below-ground tunnel connecting Technoparc, in St-Laurent, to the Montreal airport.

Alice isn't just any drilling machine: she not only excavates but extracts earth and rock that can be recycled into cement for construction.

What's more, the machine contains ring segments that form the concrete tunnel as it's being drilled out.

In other words, Alice digs and builds at the same time -- 35 metres underground.

"It's a first in Quebec. We never used that kind of machine," said Jean-Vincent Lacroix, a spokesperson for CDPQ Infra, the contractor for the REM project. "It's really efficient machinery."

The tunnel she helped build will be used to transport travellers to the Pierre Elliot Trudeau airport. 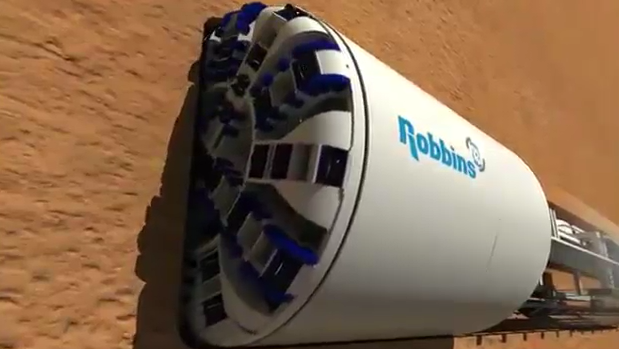 The state-of-the-art Auger contains ring segments that form the tunnel as it's being drilled out. (CDPQ Infra)

On paper, Alice's quest is complete.

But the mayor of Dorval, the city neighbouring Montreal where the airport is located, wants her journey extended another 700 metres.

His goal is to connect the airport to the Dorval traffic circle and nearby Via Rail station.

"This is the opportunity to do it. It's the right time to do it," Mayor Marc Doret said. "I just don't understand why we can't go the extra 700 metres, it's a no-brainer. The decision is simple."

He said it would help solve traffic issues and respond to a need for public transit access in Dorval.

Lacroix said CDPQ is open to the idea, but it's not up to them.

"On our part, we want to be a very good collaborator for that. But it's just not a decision from our part. There are a lot of entities [involved]," he said.

Doret says the extension would cost around $250 million -- a price he says is a bargain.

Both the provincial and federal governments are looking into the proposal to extend the tunnel.

While the first trains should roll to the airport by 2025, it will be up to Quebec and Ottawa to determine if Alice's job is done, or if she has another 700 metres to go.

The federal government is asking a judge to dismiss a proposed class-action lawsuit brought forward by a group of Black public servants, who allege discriminatory practices within the public service.

A U.S. court has sentenced a Canadian man to 20 years in prison for his role in a number of cyberattacks involving the ransomware NetWalker.

Alberta’s governing United Conservative Party is scheduled pick the province’s new premier Thursday, and political observers say its next step should be getting back on the same page as the rest of the province.

A school board east of Toronto is apologizing after a four-year-old student walked home alone during lunchtime earlier this week.

'Unheard of': Tens of thousands of salmon found dead in B.C. creek as drought conditions persist

B.C.'s sunny, dry weather is leading to major drought conditions in parts of the province, causing devastating impacts for some wildlife.