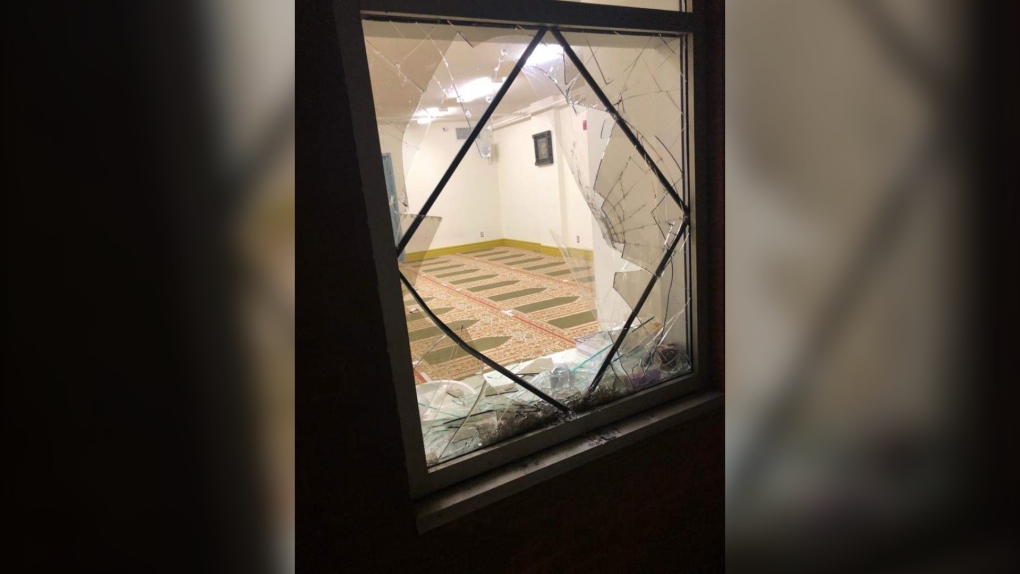 A broken window at the Makkah-Al-Mukkaramah mosque in Pierrefonds after a break-in on Monday, Oct. 19, 2020. (Photo: CCA Islamophobie, Twitter)

MONTREAL -- Police in Montreal and the South Shore say they’re still investigating after two back-to-back break-ins at local mosques, but haven’t yet joined forces to see how much the two cases have in common.

“We’ve checked the modus operandi,” said Jean-Pierre Brabant of Montreal police of the two break-ins, one in Brossard and the other in Pierrefonds.

It’s only been a couple of days, he said, but investigators may get in touch with those across the river.

“We're not closing any doors to see if they’re linked,” Brabant said.

The Pierrefonds incident was discovered on Monday, he said. People at the Masjid Makkah-Al-Mukkaramah on Gouin Blvd. called police in the evening to report a break-in.

Officers saw that a basement window was broken, and checking security-camera footage, could see the intruder’s arrival around 8 a.m. that morning.

The man broke the window, and “from inside, he tried to get the box for donations, tried to steal them, but he was not able to,” said Brabant, since the box was locked in place.

It was very difficult to get a good description of the suspect, he said, or even a general idea of his age, because he was dressed all in dark clothing and was wearing a hooded sweatshirt and a face mask, as is typical these days.

The motive, so far, appears to be theft rather than an expression of hate, said Brabant—there was “no graffiti” at the mosque or other such signs.

“We spoke with the personnel from the mosque,” he said, and in recent months “they didn't receive any threats.”

WORRIES ABOUT A PATTERN

A similar incident happened two days earlier, on Saturday, at the Islamic Community Center on Grande-Allée Blvd in Brossard.

“I can't go into the details of the investigation, but the suspect went inside and there was other damage inside,” he said, particularly inside the mosque’s administrative office.

He also said there were no indications the break-in was a hate crime, but that the investigation is ongoing and in early stages.

He said a next possible step for investigators would be to put a callout on social media with a description of the suspect if they can pull together enough information from cameras. That may happen in the next couple of weeks, he said.

“It's too early to make any kind of link with Montreal,” he said. “At this point, if there were similarities, yes, we would call SPVM and collaborate with them for sure.”

No one from either mosque could be reached for comment.

The Canadian Anti-Islamophobia Collective, whose acronym is CCA Islamophobie, posted photos of both break-ins on Twitter earlier this week, saying that the Brossard one also included a theft.