MONTREAL -- After criticism it wasn’t doing enough to prevent domestic violence and to support survivors, Quebec has responded with a swath of new measures to help keep women safe and, according to some advocates, the province got it right this time.

The Ministry of Public Safety shared more details with CTV News about its plans to beef up some police services with specialized domestic violence teams thanks to an investment of $27 million over five years. It was part of the government’s announcement on the issue -- its fourth in the past month -- to address the 10 cases of men allegedly killing their female partners so far this year.

Svetlana Chernienko, a mental health advocate in Montreal and survivor of domestic abuse, said what the province is doing is a step in the right direction at ending the recent rise in femicides.

"I was actually very excited because this is something that many people that have gone through domestic abuse, [and] as a survivor myself, this was something that I was waiting for," she said.

On May 6, the ministry announced Montreal police was one of the first three police services to receive funding for a team of eight officers and on Friday, the force announced it will be led by Commander Anouk St-Onge, who heads the domestic violence file at the corporate level.

The new unit will also include a lieutenant-detective, a strategic planning advisor, four sergeants-detectives and an "advisory officer." Part of the team’s mandate will be to take a more co-ordinated approach to intra family violence and provide survivors with “personalized support” throughout the process.

The force, which gets around 16,000 calls related to domestic violence each year, will also work with community organizations to direct offenders to resources to reduce the risk of re-offending.

For the Terrebonne police service, the public safety ministry told CTV they will get one "domestic violence liaison officer" whose job will be to work with survivors to put them "at the centre of interventions" and to guide them through the judicial process.

Provincially, the Surete du Quebec is also hiring eight officers for its domestic violence team, which will include a provincial coordinator. The team will be directed to, among other things, "develop tools to support police intervention, prevention and training" and to review practices surrounding when police officers should intervene in suspected cases of abuse.

The three pilot projects will be funded by the $27-million commitment from the province, which is available to police forces and correctional services that request it. The money can go toward hiring police officers and social workers to test these approaches to ending domestic violence and using them in other jurisdictions if deemed successful.

What’s most reassuring to Chernienko, who was kidnapped and abused by her male partner several years ago, is how the new team of specialists with the Terrebonne police will be required to do follow-ups with all survivors within seven to 10 days of a domestic violence incident.

"A lot of the time we wind up going back to our abusers due to manipulation and things that they say to us, so having an officer, knowing that there's somebody there to protect us so that we don't fall into the manipulation of going back, is extremely important," she said.

"If you're in a situation, like myself, where I had a child, it's very important. I just wish that it was a little bit longer than seven to 10 days." 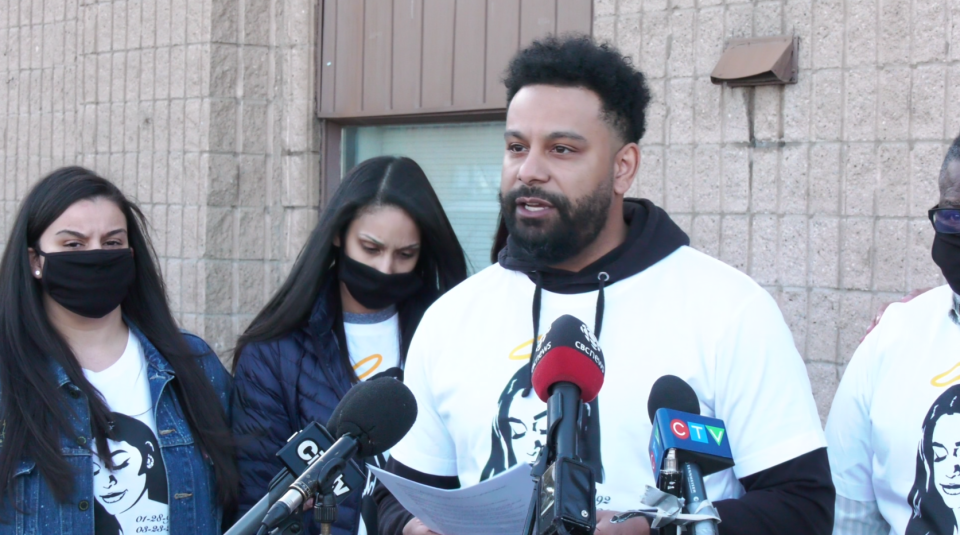 Teddy Frenette, whose sister Rebekah Love Harry was allegedly murdered by her male partner, calls on the government to do more to prevent violence against women on Monday, March 29, 2021. (Billy Shields/CTV News)

For some who work in the field of violence against women, the announcement for new fuding for police services didn’t come as a total surprise. It was recommendation 34 in a massive report released last December from a panel of experts who studied how to rebuild trust for survivors of sexual assault and domestic violence in Quebec.

Melpa Kamateros, executive director of Montreal’s Shield of Athena, was one of the experts who worked on the two-year report.

"So, unfortunately, it's not the [femicides] alone, but I would say it's more of a concerted pressure from the women's organizations that have had enough," she said.

Kamateros said she is hopeful that these changes will lead to better outcomes for women who sometimes fall through the cracks when trying to flee violent situations.

"More screening of cases, better follow-up, better referrals, also better training of the police; we need that because ... a lot of times the violence is minimized," she added.

"So, all of these are good things and they're all pointing to a more sort of centralized interconnected system of checks and balances where violent crime and homicide can be prevented."

If you or someone you know is suffering from domestic abuse, here are some available resources: