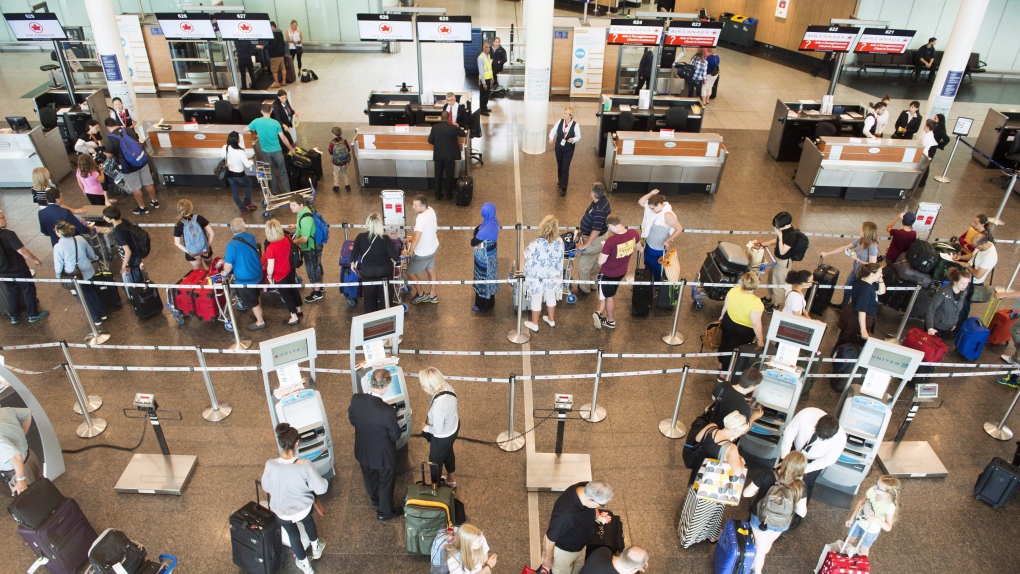 Passengers wait to check-in at Trudeau Airport on July 19, 2017 in Montreal. A passenger rights company says a loophole in proposed regulations could allow airlines get off the hook for compensation and put air travellers at risk. AirHelp notes in an open letter to the government that the rules impose no obligation on airlines to pay customers for delays or cancellations if they were caused by technical problems discovered on the tarmac. THE CANADIAN PRESS/Ryan Remiorz

MONTREAL -- An advocacy group is calling on the country's transportation regulator to take a stand against airlines that prevent passengers from seeking legal advice until their compensation claims have already been rejected.

"'Contact airline first' clauses are often used as an opportunity to reject and filter out many valid claims, as the airlines know the majority of passengers will not pursue the matter further," AirHelp chief legal officer Christian Nielsen said in release.

Up to two-thirds of Canadian claimants give up their claim after an initial rejection by the airline, according to an online YouGov survey last year that included 10,400 participants from nine countries.

A 2019 AirHelp study based on hundreds of thousands of the company's claims also found that airlines wrongfully reject more than 50 per cent of valid claims at first.

Air Canada customer Steve Pereira hopes to force legal clarity on the issue with a case now before the Canadian Transportation Agency, though a backlog of thousands of complaints could delay the outcome.

The regulator upheld Air Canada's clause in a decision from March 2019, the airline noted.

"It is always our desire to resolve any issues that arise quickly and fairly," Air Canada spokesman Peter Fitzpatrick said in an email.

"The agency said our approach is a means to minimize delays and offers an efficient way to resolve claims (noting our online process is very easy to use and customer friendly), it protects the interests of passengers, and is in keeping with the intent of other regulations, such as the EU rules."

AirHelp says the precedent comes into question in the wake of recent case law abroad and a new passenger rights charter in Canada.

"Times have changed," Nielsen said in a phone interview.

"Over the last two years, that case law has been overturned. So now in Europe it's illegal," he said, citing a pair of rulings in German and Austrian courts over the past 12 months.

The federal government rolled out its Air Passenger Protection Regulations last year, which lay out compensation requirements for incidents ranging from tarmac delays to flight bumping.

Airlines filed a court challenge in 2019 arguing the regulations go too far on mandatory compensation, while consumer advocates say the rules grant carriers too many exemptions.