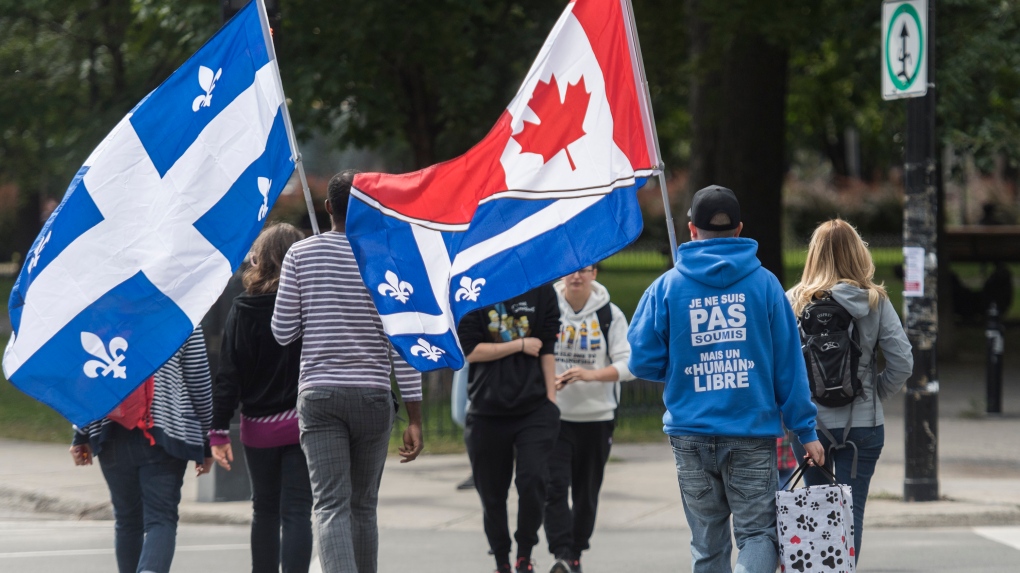 MONTREAL -- Quebec's COVID-19 case numbers hit their highest numbers since the end of May this weekend, but Alexandre Laberge-Ayotte wasn't worried.

Laberge-Ayotte and a handful of other protesters stood outside a Montreal subway station on Saturday, chanting "Liberty!" and waving Quebec flags in one of a number of demonstrations taking part around the province to protest mandatory mask wearing and call for an end to the government state of emergency aimed at fighting the pandemic.

This demonstration was small, with two dozen protesters or less. Others have been much larger, including one that took place a week earlier in Montreal that drew thousands of people.

But while the scope of the anti-mask movement remains unclear, choosing how to address the underlying sentiment poses a challenge to leaders struggling to maintain clear messages and public trust, according to several experts who spoke with The Canadian Press.

Maya Goldenberg, an associate professor of philosophy at Guelph University whose research focuses on medical beliefs, says anti-mask sentiment is likely a symbol of a larger uncertainty "of what the pandemic will do to us in the long term."

"It becomes a thing to invest energy in, as a way to broadcast a sort of general discontent about how things are and how they might go," Goldenberg said in a phone interview.

Laberge-Ayotte, for his part, says he's not anti-mask, but rather "pro-choice."

He's calling for an end to the state of emergency, which he calls "disproportionate" to the situation. He is also skeptical of some of the numbers provided by the government, including those on deaths, and does not think the rising number of positive tests is concerning because he believes most cases are asymptomatic.

In fact, recent research indicates asymptomatic cases likely account for about 40 to 45 per cent of COVID-19 infections. Those patients can also transmit the virus to others for an extended period, "perhaps longer than 14 days," according to the review published this month in the Annals of Internal Medicine.

Goldenberg said those who question public health officials or scientists on the effectiveness of masks or vaccines usually do so from a place of "broader mistrust" of the system as a whole.

Toby Fyfe, the president of the Ottawa-based Institute on Governance agrees.

"I think you see with the masks, it's sort of manifesting itself in terms of a broader discontent and a lack of faith or trust in those who ... tell us what they think we should do," he said.

Fyfe stresses that questioning government authority is nothing new, saying he remembers protests against mandatory seatbelt-wearing.

But he believes the process has been exacerbated by social media, which makes it easier for people to find others who share their own opinions and filter out others.

He points to the election of perceived "outsiders" such as U.S. President Donald Trump, as well as the rapid spread of misinformation and conspiracy theories, as examples of such mistrust.

This month's Montreal demonstration, for example, featured pro-Trump flags as well as numerous signs promoting the QAnon conspiracy theory, which is centred on the baseless belief that Trump is waging a secret campaign against enemies in the "deep state" and a child sex trafficking ring.

The beginning of the pandemic led to a spike in public trust, judging by the sky-high approval ratings of politicians such as Prime Minister Justin Trudeau and Quebec Premier Francois Legault. Goldenberg, for one, is not yet convinced that the recent demonstrations are evidence that this trust has eroded.

What is clear, however, is that responding to it poses a challenge for leaders trying to unite a population in fighting the pandemic.

Legault, for example, has faced questions about why he allows the large protests to continue, despite the events exceed gathering limits and seemingly violate health advice.

Earlier this week, he said his government's plan was to continue to tolerate the demonstrations, unless they begin to affect public health. While he doesn't rule out imposing further rules in the future, he also spoke of the right to protest, as well as the dangers of amplifying a movement by attempting to shut it down.

"Do we want to make martyrs, quote-unquote, of these people?" he asked on Tuesday. "So there are pros and cons. It's not black and white."

Goldenberg said addressing protests is difficult for leaders, who need to try to correct misinformation without giving those who spread it more attention.

It's also been a challenge to convey clear and consistent messaging about the pandemic despite uncertainty surrounding the science, she said.

The government, for example, initially told the public that masks were not recommended as a tool to fight the pandemic, before later reversing that stance.

While there is no clear solution to countering mistrust and information, Goldenberg believes the best way to maintain public trust is to keep speaking to the public clearly and competently, as well as to admit when mistakes were made or when the research isn't clear.

"Honesty is usually the best way," she said.

"And support the public, because they're struggling right now," she added.