Actress and politician Andrée Champagne has died at 80 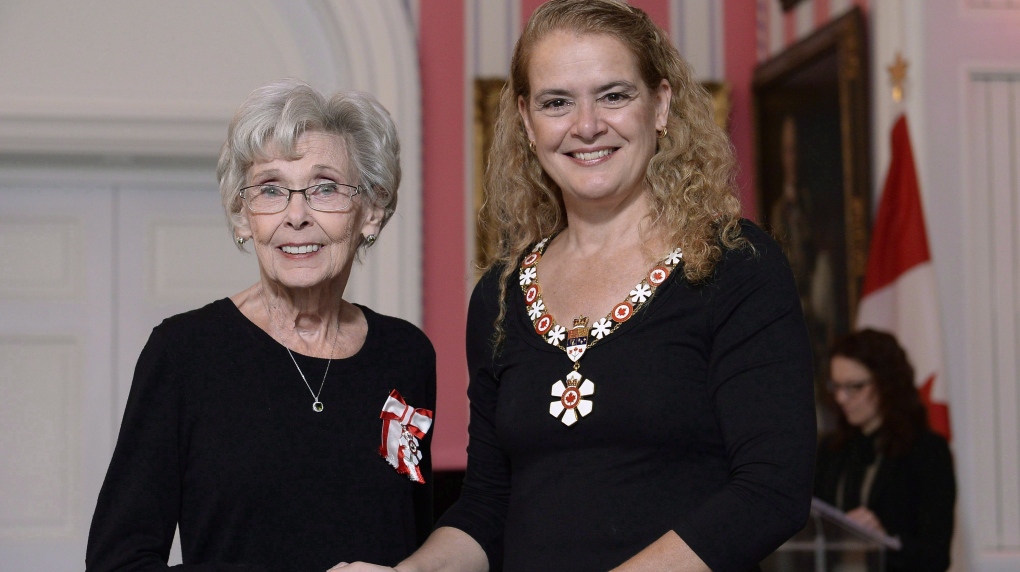 Andree Champagne, of Saint-Hyacinthe, Que., a television performer, Member of Parliament and Senator, is invested as a Member of the Order of Canada by Governor General Julie Payette during a ceremony at Rideau Hall in Ottawa on Tuesday, Nov. 20, 2018. THE CANADIAN PRESS/Justin Tang

MONTREAL -- Actress and politician Andrée Champagne has passed away at the age of 80, leaving behind her loved ones, as well as thousands of Quebec viewers for whom she has always remained Donalda, the tragic heroine of “Les Belles Histoires des pays d'en haut” which she embodied for 15 years on the small screen.

The blonde-haired, blue-eyed beauty was barely 17 years old when she got the first female role in the big Radio-Canada series inspired by the novel “Un homme et son péché.” For more than a decade, she and Jean-Pierre Masson formed the dysfunctional couple so famous that even young people today have heard of the duo.

In addition to her talents as an actress, Champagne was also a singer and host. She participated in various radio shows, hosted the opening ceremonies of Expo ‘67 as well the 1976 Olympic Games in Montreal.

She was not just a popular star. A convinced federalist, she lent her voice to the service of the No campaign during the 1980 referendum. As she summed it up in her autobiography “Champagne pour tout le monde!:” “The female voice of the slogan ‘Le Canada j'y suis, j'y reste’ it was me and I haven't changed my mind.”

She was also a seasoned and committed businesswoman, who created her own distribution company, Duo Casting, and got involved in the Union des artistes, from which she was successively vice-president then general secretary, between 1981 and 1984.

It was at this time that she founded Le Chez-nous des artistes, a unique retirement home for television creators and artisans, among others. The establishment, which is located in Montreal, has nearly 80 apartments.

In April 1984, she visited the USSR as a delegate from the International Federation of Actors for a conference set up by UNESCO relating to the status of the artist.

Her work at the UDA gave her a taste for politics and she was easily persuaded to take the leap alongside Brian Mulroney in 1984. Her dream: to advance the cause of artists.

She was elected under the Progressive Conservative banner in her native riding of Saint-Hyacinthe-Bagot, which she represented in the House of Commons until the end of the “Blues” reign in 1993.

During her first term in Ottawa, she was, among other things, Minister of State for Youth and Vice-Speaker of the House of Commons.

After her electoral defeat, Champagne returned to her first love: the small and the big screen. She notably starred in “Scoop”, “Omertà” and “Juliette Pomerleau”. For 10 years, she also dubbed films and computer games in both official languages.

She attempted to return to the House of Commons with Stephen Harper’s Conservatives in 2004, but was unable to get elected. Appointed to the Senate on the recommendation of Paul Martin in 2005, she chose to sit as a Conservative.

In 2007, she contracted meningitis during a diplomatic trip. Her condition worsening upon her return to the country and doctors put her in a coma for 42 days.

When she woke up, she underwent a long rehabilitation and worked on her memory. She recounted her fight in detail in a new autobiography entitled “Je reviens de loin”.

During the coma, doctors considered stopping treatment. This episode caused the senator to express great reservations about the Quebec law concerning end-of-life care.

During her tenure as a senator, Champagne was very involved in files concerning linguistic minority groups in Canada. She was also involved internationally, notably being appointed president of the Assembly of parliamentarians of the Francophonie in 2013.

She left the Senate in 2014, when she celebrated her 75th birthday. Three years later, she was made a member of the Order of Canada.

Previously, she had been married for 15 years to a Montreal Royals hockey player, Walter (Wally) Clune, with whom she had two children, Liliane and Patrick, both of whom had careers in television and the cinema.

This report from The Canadian Press was first published June 6, 2020.