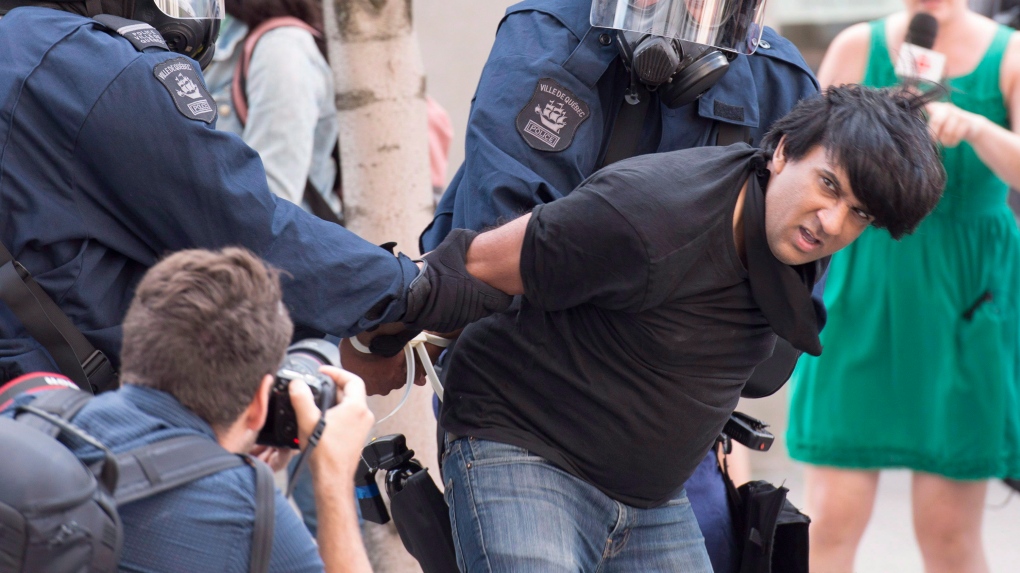 Activist Jaggi Singh is arrested during an anti-racism demonstration, in Quebec City on Sunday, August 20, 2017. THE CANADIAN PRESS/Jacques Boissinot

MONTREAL -- Activist Jaggi Singh, who has been facing charges stemming from his arrest at an anti-fascist protest held in 2017, walked out of Quebec City court a free man on Wednesday after prosecutors announced they were incapable of proceeding with Singh's trial in English.

According to Le Journal du Quebec, Steve Marquis, the chief Crown prosecutor for Quebec City, told Judge Pierre Bordeleau that neither he nor any of his available colleagues were capable of presenting the prosecution's arguments in English. (Singh, who is fluently bilingual, had requested a trial in English.)

Marquis - who told the judge that the original prosecutor in the case, who could proceed in English, was on maternity leave - asked for a delay in the proceedings, which Bordeleau denied. The judge then acquitted Singh on the two charges, obstruction of justice and impersonation, that he was facing.

Singh, 49, a veteran activist, was arrested Aug. 20, 2017, at an anti-fascist counter-protest to an alt-right gathering. When arrested, Singh told police his name was Michel Goulet (the name of an old Quebec Nordiques player) and said he resided in Le Colisée (the Nordiques' old arena).

In a Facebook post Wednesday, Singh said he felt the prosecution "self-sabotaged" its case rather than lose the trial, which had been scheduled to run today through Friday.