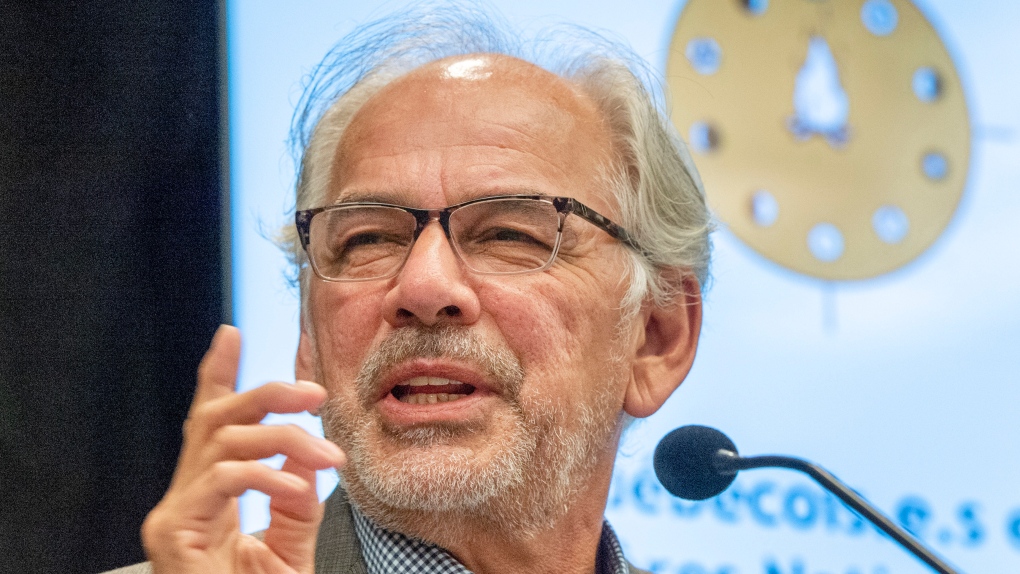 Ghislain Picard, Chief of the Assembly of First Nations Quebec-Labrador, speaks to the media about a survey on Quebecers attitudes toward First Nations at a news conference Wednesday, August 12, 2020 in Montreal. THE CANADIAN PRESS/Ryan Remiorz

MONTREAL -- Calling it a "true revolution," Assembly of First Nations of Quebec-Labrador (AFNQL) Chief Ghislain Picard sounded optimistic Thursday about the start of a two-day summit meant to bring Indigenous nations into the Quebec economy.

"This Grand Circle is not an end in itself, but the beginning of a movement for the full participation of Indigenous Nations in our economy," said Picard in his opening speech at the major networking event between Indigenous entrepreneurs and chiefs, business leaders and MNAs.

The Grand Economic Circle of Indigenous Peoples and Quebec, a joint initiative by AFNQL and the provincial government, was also launched by Indigenous Affairs Minister Ian Lafrenière, who welcomed an "incredible" opportunity to "establish a plan for the future."

"In the next two days, I invite you to work together to find solutions so that the economic share that belongs to the First Nations is really well done and is done together,” he said.

The conference room at the Centre Sheraton Hotel was packed Thursday, with participants already fully engaged in conversation before the speeches.

Chief Picard cited the rich tradition of trade between First Nations prior to the arrival of Europeans and "the destruction of our economies."

"What we are announcing is nothing less than a true revolution... and let us hope that this revolution is not a quiet one,” he said.

As part of the event, "Quebec businesses and organizations are invited to make public commitments to better include Indigenous Peoples in the economy," the website stated

RETURNING TO THE CIRCLE

Chief Picard also made a point of "tackling the elephant in the room," namely the issue of unceded territories.

“I want to reiterate our determination to have our rights, our ancestral territories and our self-government respected," he said.

“Land is the foundation of wealth in this province," said Assembly of First Nations National Chief RoseAnne Archibald. "The people who are the rightful custodians of this land are the First Nations... They must be central to the discussion.”

She added, "the pandemic has exposed the inequalities faced by First Nations and the injustices they have suffered.”

She also spoke of "the grief of thousands of our grandchildren who never found their way home" after dying in residential schools.

We must “support our next generation of children” so that they have a better future, she concluded.

The circle, in Indigenous traditions, represents something sacred: “the relationship that binds everything in our world ... our interdependence and responsibility to the smallest of plants and animals,” explained Chief Picard.

He said he hopes the discussions and business opportunities that will come out of the event will be a step towards restoring the circle that was broken by colonization.

The Grand Circle will continue on Friday with many activities and panels.

- This article was produced with financial support from Facebook and The Canadian Press News Fellowships and was first published in French on Nov. 25, 2021.