Renowned Montreal broadcaster Dave Fisher, who retired from a radio career that spanned three decades at CJAD 800, has died.

Fisher passed away Wednesday morning after suffering a heart attack, according to his family. 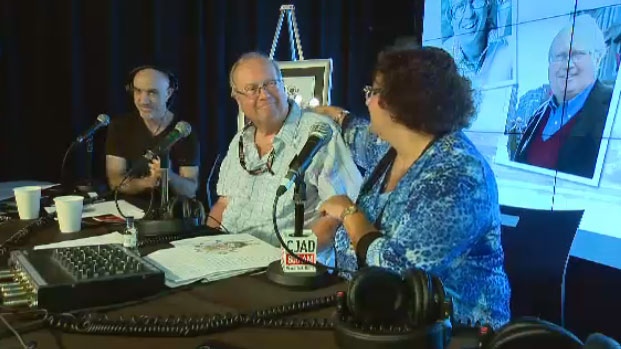 Fisher worked at CJAD for 32 years, retiring in 2016 in front of a live audience for his final broadcast. Before signing off for the last time, his name was added to the CJAD Wall of Fame, marking an end to a remarkable career in broadcasting in the community that loved him just as much as he loved it.

The longtime Montreal radio personality amassed a devoted audience while hosting the station's weekly Trivia Show, a long-running mainstay of the station that remains on the airwaves and is among the market's highest-rated shows.

A FAMILIAR VOICE ON MONTREAL AIRWAVES

Veteran radio host Ken Connors told CTV News that he was "honoured and flattered" when he was announced as Fisher's replacement in 2016 and called the broadcaster's sudden passing "a devastating blow" to Montrealers.

"Dave was a radio legend and still is in the city. He had that warm, wonderful voice for so many years that CJAD, he hosted Saturday and Sunday mornings — the weekend show — and of course, the trivia show and he was just a welcome presence in so many homes and so many lives for decades, really," Connors said in an interview Wednesday.

Fisher, a familiar voice on Montreal's airwaves for years, connected with the audience immediately during his segments in such a way that you considered him as part of the family, Connors said.

"He was just so so good at what he did and just an amazing broadcaster — one of the giants, really, in the city."

Fisher made his radio debut in Lindsay, Ont. before working at stints in Peterborough, Ottawa, and Winnipeg. He made Montreal his home in 1984, keeping his same time slot right up until his retirement.

He maintained that among the major stories he covered as a broadcaster, it was the ice storm of 1998 that really stuck with him. Even though CJAD was knocked off the airwaves, he came into the office and answered calls from Montreal residents.

"For me, it’s all about the listeners… who really are better than Google. If you want to know anything, just ask. They were my motivation," said Fisher at the time.

Andrew Carter, host of CJAD's morning show, recalled meeting Fisher for the first time as a young reporter in the newsroom in the mid-1980s and marvelling at his innate ability to put his foot down when he needed to.

"He was never beholden to management. He was his own guy. He could come across as a curmudgeon at times when it came to dealing with management but he never gave an inch. I airways respected that because it's so hard to do," Carter told The Elias Makos Show. "It's a tough day for the CJAD family."

Fisher's impact even went beyond Montreal's borders. Vermont radio host Robert Welch wrote on Twitter he was "saddened" by his death as a regular listener to his shows in the 1990s.

Oh gosh I’m saddened to read this. Aside from the times I wasn’t doing that shift myself at my station, I was listening to Dave Fisher on CJAD. As a new college student in Lyndonville, VT in 1998, CJAD was the station on weekends. He just sounded a friendly uncle in Montréal. https://t.co/bVAiDLQanN

Former colleagues, friends, and longtime listeners also expressed their condolences on social media, writing that he was born to be the broadcaster he became and describing him as a "kind, classy and funny guy."

Saddened by the news of the passing of long time CJAD host, Dave Fisher. A Montreal radio staple for 32 years, he was one of the hall of famers at CJAD. He retired in 2016 & was so looking forward to it. Dave & I were colleagues during my time at CJAD. Condolences to his family pic.twitter.com/I1yJ6QHBCx

Very sad news indeed. I have nothing but fond memories of working with Dave Fisher at @CJAD800. Rest In Peace, old friend. https://t.co/TPXFllGaqf

So sad to hear this…Such a kind, classy and funny guy. RIP to one of the greats. https://t.co/4nh44QcoCN

Saddened by the sudden passing of an old mentor, Dave Fisher. Like so many other Montreal broadcasters, I started my career working “behind the board” with Dave on weekend mornings; a learning experience which had an immense & impact on my future. Condolences to Dave’s family.

Dan Laxer, long-time co-host of The CJAD 800 Trivia Show with Dave, said Fisher was a mentor to him as a young announcer on the radio. Reacting to his death on Wednesday, he said Fisher carved a niche on the radio that drew in listeners looking for that "special" dose of Dave on the weekends.

"There's a certain mix a radio announcer needs — that mix of a sense of humour, a sense of gravitas, friendliness and he understood that sense of community. As much as I say he galvanized the team around him, he really galvanized weekend listeners who tuned in not to hear news and sports and whatever they say, [but] 'let's listen to Dave.'"