A new Leonard Cohen album is on the way (and some stamps in his honour, too)

As Canada Post gets set to unveil three stamps in honour of the legendary singer-songwriter - who died in November of 2016, and would have turned 85 on Saturday - Sony Music has announced that a new collection of Cohen songs will be released Nov. 22.

As the record label noted in its announcement, these aren't just a bunch of b-sides and alternate takes either: Thanks for the Dance will feature nine Cohen songs that he had asked his son and producer Adam to complete after Cohen's death.

Adam Cohen collaborated with several artists who had previously worked with or were influenced by his late father in finishing Cohen's work. Those artists include Spanish laud player Javier Mas, singer-songwriters Damien Rice, Patrick Watson and Feist, Richard Reed Parry of Arcade Fire, and Bryce Dessner, guitarist for the acclaimed indie-rock band The National.

Also on the album is the Shaar Hashomayim choir, which performed on Cohen's final album, You Want it Darker, the title track of which won a Grammy Award for best rock performance in 2018.

A video for The Goal, a song from the forthcoming album, began streaming on Friday.

“In composing and arranging the music for his words, we chose his most characteristic musical signatures, in this way keeping him with us,” Adam Cohen said in a statement. “What moves me most about the album is the startled response of those who have heard it. ‘Leonard lives’! they say, one after the other.”

As fans await the new album, they can get their hands on three new Canada Post stamps in honour of Cohen. The stamps, which are to be unveiled Friday evening at an event at Montreal's Museum of Fine Arts - overlooking the massive Leonard Cohen mural on a high-rise on Crescent St. - go on sale to the public Saturday (Sept. 21). 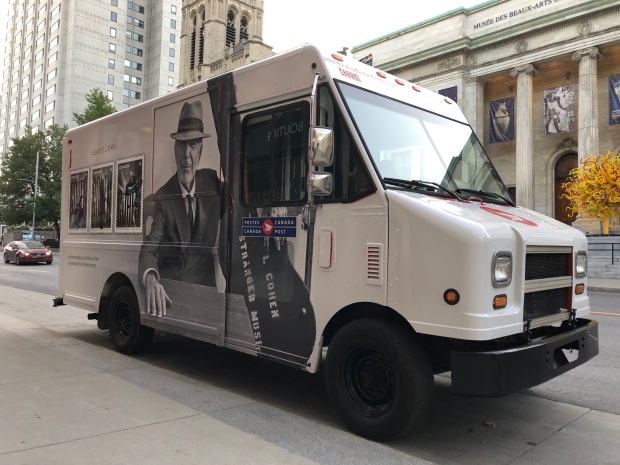 Canada Post will also be holding a public celebration of the new stamps Saturday from 10 a.m. to 2 p.m. at its downtown Montreal branch (1974 Ste-Catherine St. W.)