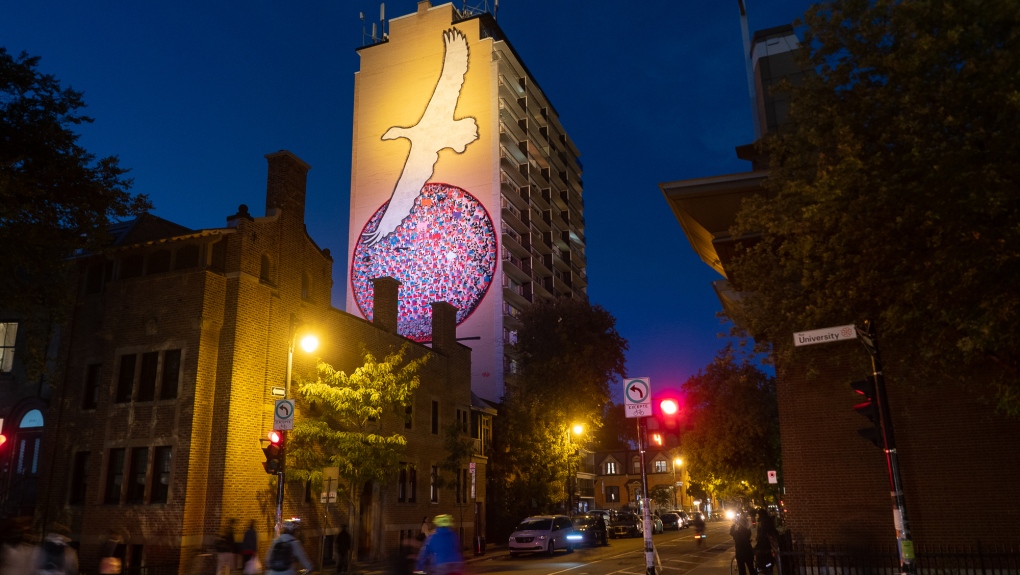 A monumental mural paying tribute to the artist Jean-Paul Riopelle, born 100 years ago, was inaugurated Tuesday evening in Montreal.

The mural, signed by painter Marc Séguin, was created in collaboration with the MU organization, which has already embellished 200 walls in Montreal over the past 15 years.

Entitled `Magnetic Art', the work, which has a surface area of 835 square metres and is 48 metres high, adorns the wall of 625 Milton, at the corner of Lorne Street, in the `Milton Parc' area. That is right in the heart of Riopelle’s native Plateau-Mont-Royal neighbourhood.

Séguin made use of Riopelle's emblematic bird, which the Montreal-born painter, who died on Isle-aux-Grues, often integrated into his work, particularly in stencils.

The mural is the first legacy project the Fondation Riopelle and its partners wanted to offer during the festivities surrounding the 100th anniversary of the birth of the famous Quebec painter.

The painter, engraver and sculptor, is a leading figure of the Automatiste movement in Quebec, and was one of the co-signatories of the manifesto 'Refus global'.

This report by The Canadian Press was first published in French on Oct. 5, 2022.

Better protections and options for consumers are just some of the ways Ottawa can help address food unaffordability in Canada, the lead author behind a new price report says, as average grocery bills are expected to rise in the new year.

Ontario education support workers have voted to accept a new deal with the provincial government, putting an end to a long and contentious negotiation process.