MONTREAL -- The updated “Parc de l’Espoir” was inaugurated Wednesday morning, with changes aimed at fortifying the park’s original purpose: to honour and celebrate the memory of Quebecers affected by HIV/AIDS.

Three of the park’s founders joined together with city officials, including Mayor Valérie Plante, to witness the inauguration.

“I am very proud of this redevelopment,” said the mayor. “I invite all Montrealers to rediscover this exceptional place.”

The park was originally founded in 1991 by the Aids Coalition to Unleash Power (ACT UP), with the intention of honouring HIV/AIDS patients who had passed away from the disease.

During the AIDS epidemic, funeral directors were known to refuse services for the bodies of AIDS victims due to fear of contamination.

“At the time, we were not allowed to bury our dead in regular funeral homes. No one would touch the cadavers,” said Michael Hendricks, one of the park's founders. “So, you could never have a real funeral. So, we decided to have those funerals here.”

In place of traditional funerals, community members hung black ribbons and flowers from the trees.

The space, which had previously been a vacant lot, quickly became a gathering place.

“We started that idea, to take care of that empty space, a ‘terrain vague,'" said René LeBoeuf, another founder. “We said ‘bon, we’re going to do something.’”

Hendricks says the space allowed community members to speak openly about the disease during a time of widespread stigma.

“While it was quite sad, it was also very open and joyous,” he said. “In the sense that you could talk openly about HIV, which you couldn’t anywhere else.”

“It was a fight, but at the same time it was full of hope. We knew that we're dying, but we’re still alive,” said another founder of the park, Roger Le Clerc. 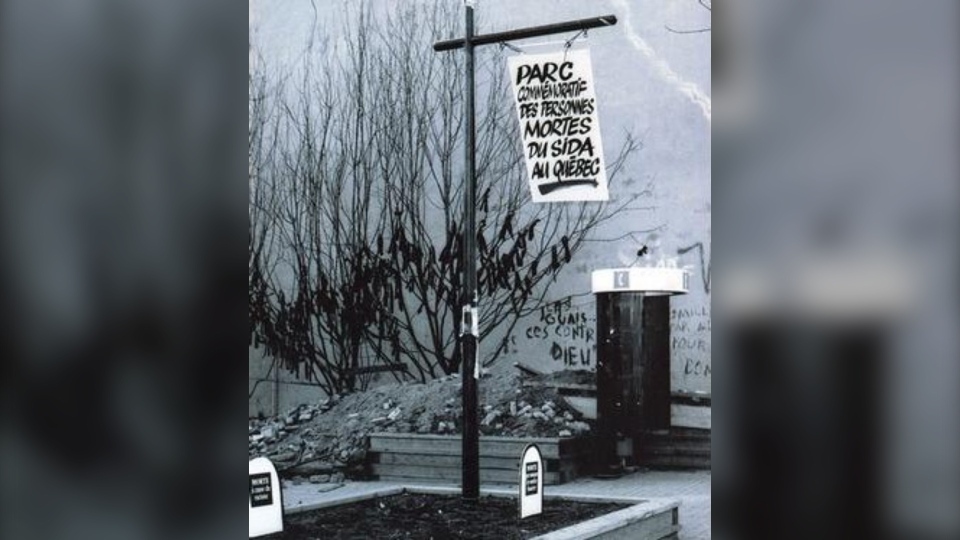 Black ribbons commemorating victims of HIV/AIDS are shown hanging from a tree in the parc de l'Espoir, decades ago. (Source: City of Montreal)

A LEGACY THAT MUST BE MAINTAINED

“It was such a horrific period,” says Shawn Dearn, a journalist who is covering the parc de l’Espoir in an upcoming documentary.

“I think what needs to be recognized and underscored the most in all of this is, [is that] this is not a park. This is a cenotaph — you know, this is the gay and bisexual community’s war memorial to the thousands of people who died because of HIV and AIDS in Quebec. And I think that that’s important,” says Dearn.

Dearn says that for many years after the park’s creation advocates fought tirelessly with the city to have the park maintained, faced with persistent stigma surrounding the LGBTQ+ community and the AIDS epidemic.

Practical changes to the park include wider sidewalks and an increase in vegetation to reduce the effects of heat islands.

Other changes were put in place to honour the park’s roots, such as a painted red ribbon that runs across its grounds. The red ribbon is a universal symbol for the fight against HIV/AIDS.

Dearn says some advocates thought the ribbon should be black, maintaining the original practice of hanging black ribbon.

“The folks who created the park didn’t initially go for red ribbons,” he says. “Gay and lesbian and bisexual Montrealers wanted black ribbons — they thought the red ribbon was too cliche and too American.”

A commemorative plaque was also installed in memory of Quebecers who died from HIV/AIDS. Le Clerc says the commemorative aspects of the park are important to maintain the park’s legacy for future generations.