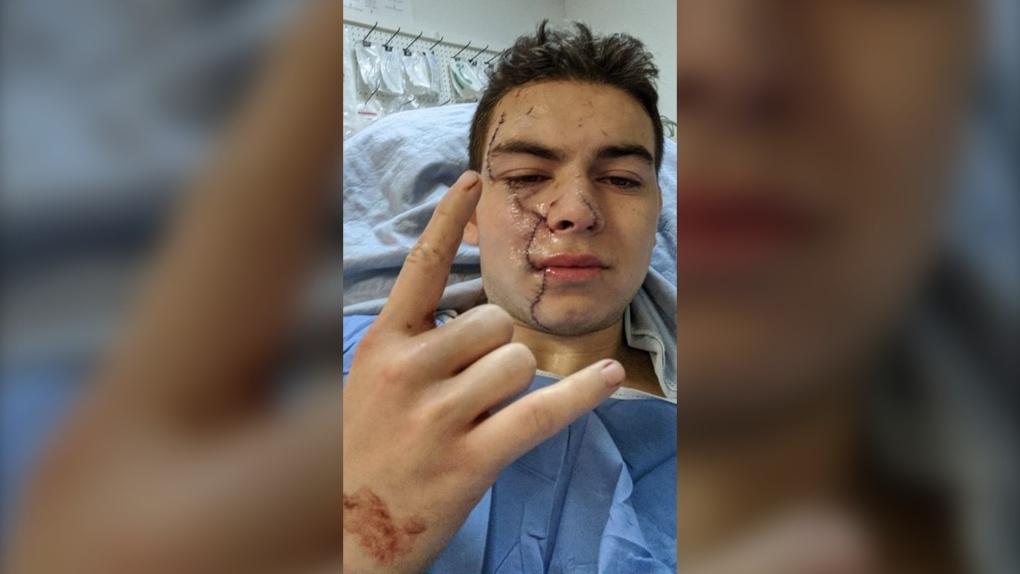 Anthony Seyer was hit in the face with a glass bottle after confronting two men whom he says made sexual advances towards his sister. (Courtesy: Anthony Seyer)

MONTREAL -- A brutal attack in a bar in Saint-Hyacinthe, in the Montérégie, has left Anthony Seyer scarred – both physically and emotionally.

Saturday night, the 21-year-old says he was at Le Shaker bar when two men tried to make sexual advances towards his 18-year-old sister. Seyer says he saw one of the men grab her breasts.

“I was at the bar and my sister was not very far away. I turned to watch these two boys because I didn’t trust them,” Seyer told CTV News. “One of them talked to her for a little bit, but it was OK. Then, he touched her.”

Seyer says he jumped up and immediately confronted them.

“He hit me in the face with a glass bottle,” he recalls. “I realized what happened because I saw all the broken glass and I looked at my hand and I saw all this blood.”

Seyer was quickly transported to hospital, though he says he was on so much adrenaline he initially didn’t think he needed to be treated by a doctor.

He suffered head trauma, a concussion and had to have countless stitches on his face. He underwent surgery on Tuesday to fix a paralysis in his left eyebrow.

Three bodyguards broke up the fight

Sûreté du Québec (SQ) spokesperson Ingrid Asselin confirms an altercation took place between Seyer and a man in his 30s.

The suspect was arrested and freed with a promise to appear at a later date.

Asselin says he has several conditions to follow, including not contacting the victim or his family. She adds the investigation is ongoing.

Seyer says he doesn’t yet know if he’ll have to undergo more surgery, but insists it’ll be worth it to protect his sister.

“I would do it again, of course. Even if I have this face, if it happens again, I will defend my sister,” he said.