MONTREAL -- About 200 vehicles were involved in a massive road accident Wednesday on a windswept stretch of Highway 15, on Montreal's South Shore, that killed two people, injured dozens and prompted a major emergency intervention.

The cars began colliding soon after noon in La Prairie. Strong winds had blown snow off the St. Lawrence River, obscuring drivers' views, some of them said. Though the weather was clear and the highway had recently been cleared of snow, according to Quebec Transport Minister Francois Bonnardel, gusts of wind can cause whiteout conditions in the area.

A group of American tourists witnessed the start of the wreckage. Whiteout conditions obscured their vision as they merged onto the highway, Spencer Jacob, a tourist from upstate New York, told CTV News. The group pulled over and called the police. Sometime later, with visibility still low, an ambulance arrived, parked in front of their car and was struck by another car, Jacob said. The collision blocked the highway and sparked the pileup.

"That's when we were like 'this is bad,' and we need to get out of the car. Our doors were pressed against the snow so we had to get out of the windows and run up onto the snowbank and we were just watching," Jacob said. The tourists tried to warn oncoming cars, but the whiteout persisted.

The chaos extended along a kilometre stretch of the highway.

Firefighters used hydraulic cutters to extricate people from at least nine vehicles. First responders had been trying all afternoon to extract two seriously injured people from a vehicle, but they died, the SQ said Wednesday evening. A tanker truck containing oil had ruptured, spilling diesel onto the road, hindering emergency crews' efforts to access the two people.

Ambulances rushed dozens of people away from the scene, prompting three local hospitals to declare a "code orange" as they received patients.

Shuttle buses transported about 150 people away from the accident to a nearby community centre where health officials continued to evaluate them, sending some to the hospital.

Of the 200 vehicles involved, 50 were able to drive away on their own, a spokesperson for the Quebec provincial police, the Surete du Quebec (SQ), said. Another 75 will have to be towed, the spokesperson added. A dozen large trucks and a school bus, whose passengers were uninjured, were also among the vehicles involved.

Cars were travelling at about 100 km/h at the time of the crash, one witness told local radio station CJAD 800. "As I was driving along going about 90 to 100, all I saw was red lights, brake lights, cars just hitting each other, trying to swerve out of the way," said the witness, who gave his name as Kyle and said he was uninjured. "I tried to do the same myself, and I got hit by another bus, smacked into the retaining wall." 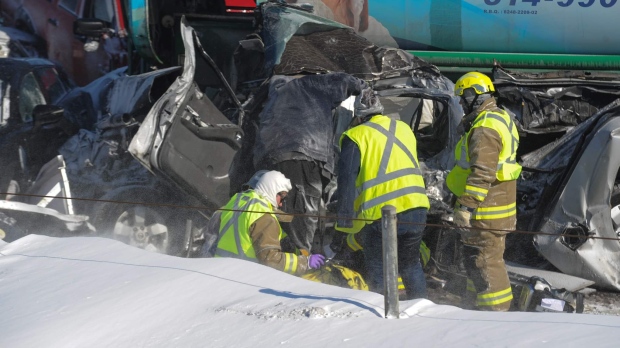 Many of the cars are destroyed.

The windswept portion of the highway where the pileup occurred is vulnerable to southwesterly winds coming off the St. Lawrence River. It's an exposed patch of road where wind can toss snow into the air, obscuring visibility. Investigators will try to confirm the cause of the crash, but Bonnardel, the transport minister, suspected windy, whiteout conditions were to blame.

The accident forced the closure of Highway 15 in both directions between Matte and Montcalm Boulevards. It will remain closed for an "undetermined" amount of time, according to Transports Quebec. Bonnardel said it could be closed until Thursday morning. The northbound lanes had reopened as of midnight Wednesday but the southbound lanes were still closed.

Premier Francois Legault tweeted about the incident, saying his thoughts were with those affected.

The SQ urged people to avoid the area. Alternate routes should be sought, the police force warned.

Wednesday's pileup was the second major road accident on the South Shore inside of two days. On Tuesday, more than a dozen cars smashed into each other, leaving some with minor injuries after wind likely caused whiteout conditions along a stretch of Highway 10, in Marieville. 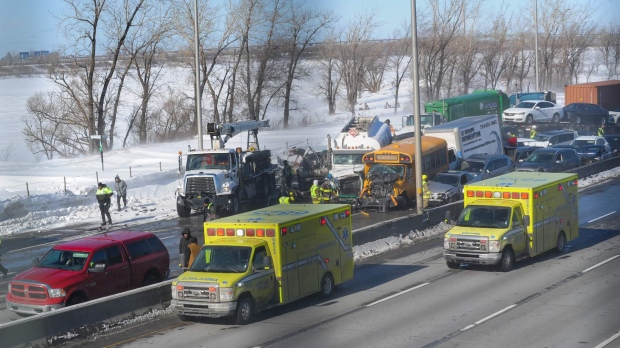