200 march in Montreal against white nationalists in Charlottesville 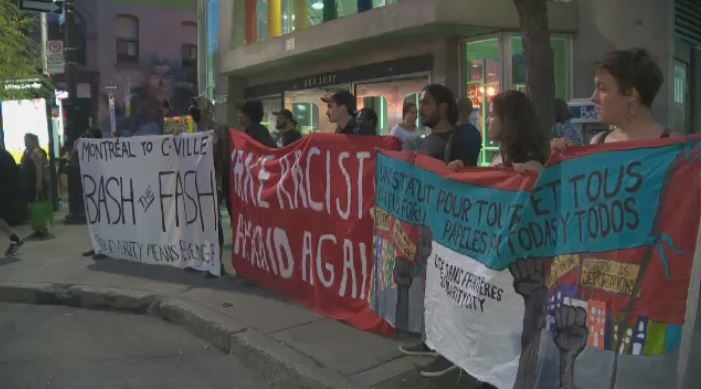 Demonstrators in Montreal denounced the racism and violence that took place in Virginia.

At least 200 people gathered in Montreal Sunday night to protest neo-Nazi and Ku Klux Klan sympathizers who held a violent rally on Saturday, in Charlottesville, Virginia.

Demonstrators in Montreal marched from Philips Square, past the U.S. Embassy and ended in the Gay Village.

They denounced the racism and violence that took place in Virginia.

A young woman, 32-year-old Heather Heyer, was killed in Charlottesville when a man drove into a crowd of counter-protestors. James Alex Fields Jr. has since been charged with second-degree murder for allegedly driving the car that killed Heyer and wounded at least 19 other people.

Two Virginia State Police troopers also died when their helicopter crashed after it was deployed to respond to the violence.

Similar anti-racism rallies were held in several cities on Sunday.