2 shootings within minutes of each other in Montreal leave 1 dead, 2 injured

2 shootings within minutes of each other in Montreal leave 1 dead, 2 injured

Two shootings that occurred within minutes of each other in Montreal's northeast end left one person dead and two others injured Wednesday night.

According to Montreal police (SPVM), at 10:20 p.m., two men opened fire in the direction of four people standing on the grounds of a high school on de Charny Street in Montreal North.

When officers arrived on the scene, they found a 26-year-old man with serious injuries.

He was transported to hospital, where he later died.

A second victim, aged 25, later showed up to hospital to be treated for non-life-threatening injuries to his upper body.

"When they [the suspects] arrived, they were on foot, but we believe they had a getaway car," said Manuel Couture, a spokesperson with Montreal police.

Couture says it is too early to know if the suspects and the victims knew each other.

"We have to know if they were targeted, the reason why; did they have a conflict with somebody before, did they receive some death threats, we still don't know right now," he said.

One resident says he's noticed police patrols in the area have gone down in recent years despite the uptick in violence.

"It used to be two, three per day, but that was 10 years ago," said Nunzio Zampini, who has lived in Montreal North for 35 years. 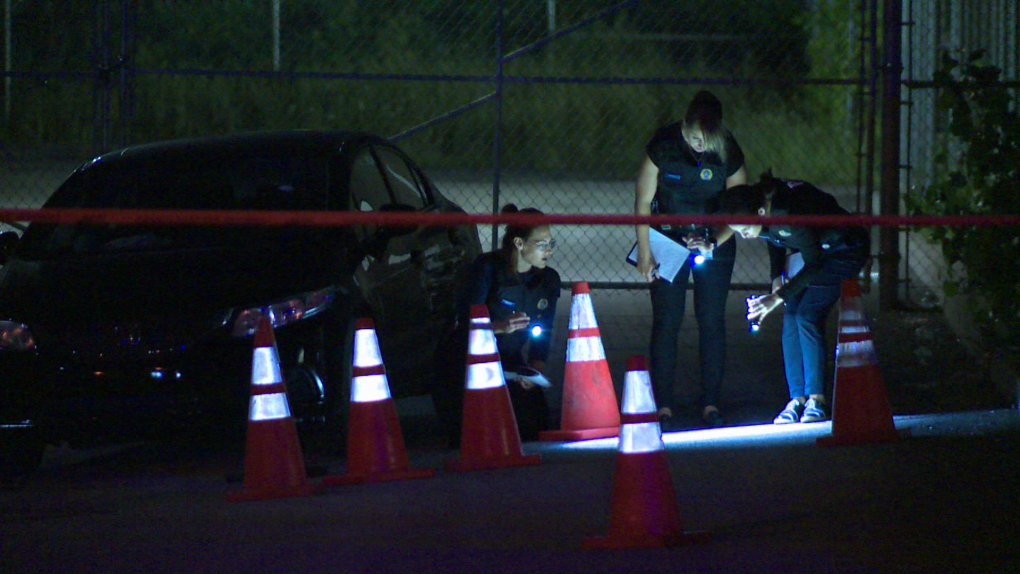 A 20-year-old woman was injured when at least one shot was fired in the direction of the vehicle she was sitting in. (Cosmo Santamaria/CTV News)

Around the same time, in the Rivière-des-Prairies neighbourhood, a 20-year-old woman was injured when at least one shot was fired in the direction of the vehicle she was sitting in.

Police say she was hit by shards of glass caused by the projectile.

"She's really slightly injured," said Couture. "She was brought to the hospital, but of course, she had a shock."

Officers note she had stopped her vehicle in a commercial parking lot on J.-J.-Joubert Avenue and Pierre-Borne Street when she was hit by gunfire from a moving car.

"We still have to meet with her to find out exactly what happened: was she targeted or is it just the wrong place and the wrong time, and they mistook the car and the person," Couture noted.

No arrests have been made in either case.

The death is considered the 19th homicide on the territory patrolled by Montreal police.

What kind of damages caused by Fiona will be covered by insurance?

Many residents of Atlantic Canada may not be able to access coverage for all the damages caused by Fiona due to a lack of insurance covering storm-related floods.

opinion | Naheed Nenshi: A moment that changed the fabric of this country forever

Fifty years ago, there was a moment that changed the fabric of this country forever, Naheed Nenshi writes in an exclusive column for CTVNews.ca. For arguably the first time, Canada extended its hand to refugees who looked different, who worshipped differently than most Canadians, but who needed help, the former Calgary mayor says.